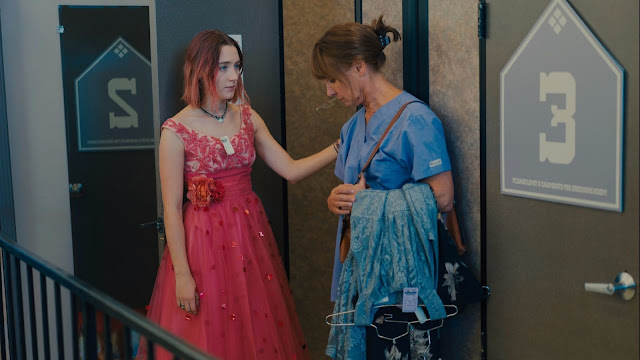 Greta Gerwig's feature Lady Bird is a triumph for her as a filmmaker and writer. It's a coming-of-age tale of the final high school year of a young woman, the self-named titular character (Saoirse Ronan), from "the wrong side of the tracks" in Sacramento and her relationships with friends, family, and a few boys. Lady Bird often finds herself in tiffs with her mother (a poignant Laurie Metcalf) that are short-lived but also run with an emotional undercurrent that feels perhaps forever unresolved. 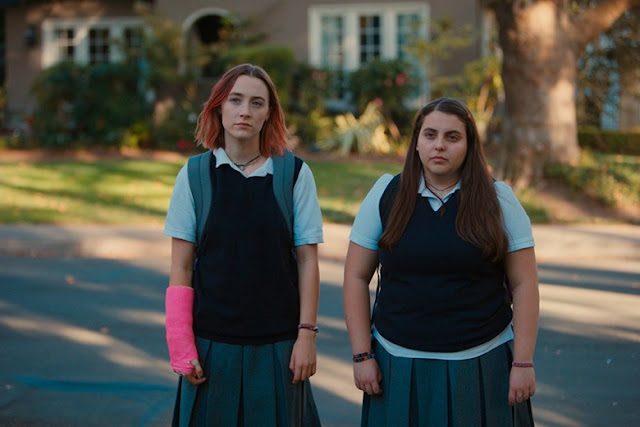 A skilled and charming actor, screenwriter and film aficionado, Gerwig also shows tremendous talent behind the camera. Reportedly broke at the time when she was on the red carpets for her major movie debut in Noah Baumbach's Greenberg, it's beyond heartening to see her rise and receive deserved acclaim as a director. Gerwig hails from Sacramento and her emotional attachment to her hometown permeates the film. In a way, it feels like a movie that was decades in the making, a story bursting to be told. The piece is visually arresting, shot with affection by Sam Levy, and edited in a distinctive rhythm by Nick Houy (who recently won the Emmy for his work on "The Night Of"). In fact, many of the movie's laughs derive from Houy's sly and sharp work. The movie is a tight ship, coasting through the seasons and ardent events of a single year with both an inherent complexity and a seeming ease. It's also a movie that's acutely conscious of its time period, the rarely examined early aughts, particularly within the breakout of the American invasion of Iraq. The unnerving news reports and financial worries (money and class division is a big aspect of this picture), along with the stuttering Timbaland beat of the very appropriately used Justin Timberlake lament "Cry Me A River," thrums along in the background of a twilight time before cell phones were ubiquitous and blocky home computers still ran on dial-up. 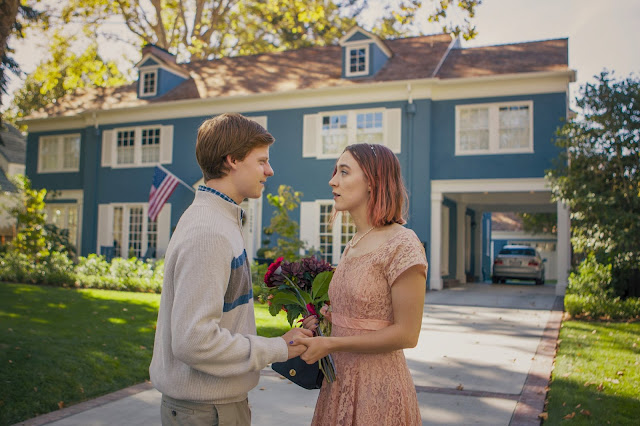 Gerwig's keen eye must have played a part too in the wondrous assembly of the cast, with many who have deep roots in theater. Laurie Metcalf is an acclaimed stage actress and a character actor in films. As the by-turns giddy and glum Aunt Jackie, she played a big part in the comic mastery of  TV's "Roseanne." It's exciting to see her with this sizable role which displays her subtlety (that head shrug when Lady Bird asks "what if this is the best version of me?") and dynamite physicality (the way she drives her car, which becomes ultimately symbolic, is miraculous stuff). As Lady Bird's best friend Julie, Beanie Feldstein, who appears in Broadway's Hello Dolly!, is hilarious, emotionally engaging, and totally winning. As the father, Tracy Letts, a well-regarded playwright and actor who I usually find too ferociously "actorly," tones himself down and emerges as a tender and understated presence. It's his best film performance. Also great in smaller roles are Lucas Hedges, Odeya Rush, Lois Smith and the magnetic Stephen Henderson playing the school's depressed theater director ironically steering a production of "Merrily We Roll Along." There's something a tad unsatisfying about the storyline of Lady Bird's brother Miguel (Jordan Rodrigues) and his girlfriend Shelly (Marielle Scott), but that's not at fault of Gerwig's writing or the strong performers as it is perhaps a point of view issue: Lady Bird cooly distances herself from them. That could be said too of Lady Bird's fumbling relationship with the purposefully detached, blankly emo Kyle (Timothee Chalamet). Ronan has been around for years and is usually exceptional, with an expressive countenance. Here, I didn't even think of her as acting, she just sails through the film as this character. 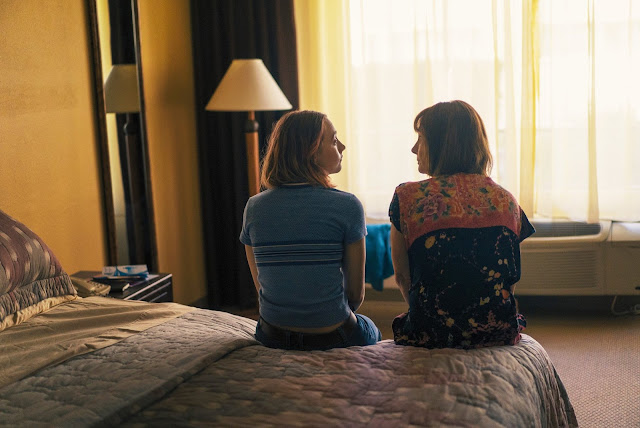 It's hard to distill all the melancholy and joy I felt watching Lady Bird in a clinical film review. When a film is really cooking, it's working on multiple levels, sometimes in ways that are at odds with each other--"scary and warm," as one of the characters describes Lady Bird's mother. I don't think I've seen the quick breaks between lashing out and affection between mother and daughter done so well since James L. Brooks' Terms of Endearment. There's a smart, bittersweet sensibility these two films share, including the psychic pain brought forth by a loving yet continuously disappointed mother and the emotional ache of separation. Like Terms too, the movie is very funny, laugh out loud funny--something I don't find often, as comedies are quite broadly bland these days--and also deeply sad and moving. I cried through most of the movie, that uncommon laughter through tears experience, it hit a nerve that so few films do and the quietly devastating turn by Metcalf floored me. ****

Posted by MrJeffery at 2:50 PM