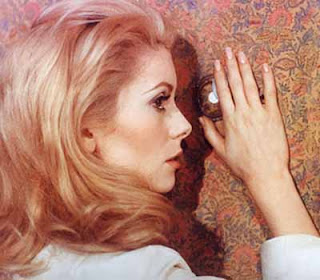 A young housewife named Séverine Serizy (Catherine Deneuve) escapes her dull marriage and becomes Belle de Jour, a high class prostitute, in Luis Buñuel's classic. The plot sounds like a straightforward potboiler but Buñuel's techniques create displacement--blurring the real and the unreal. Instead of a traditional music score, Buñuel uses the sounds of bells, clocks, sirens, horse hooves, and crashing waves to establish atmosphere, transition dream sequences and provide various symbolic meanings. In the final minutes of the film, there is a feverish rush of B-movie (and very French) moments that lead to a surreal and evocative ending which Buñuel himself stated that he didn't quite understand.

Buñuel's belief in the close relationship between sex and death is evident in Belle de Jour.

The film is relentlessly cold and opaque in its treatment of sex and relationships. When Séverine asks her husband if he visited prostitute houses during the war, he admits that he did and that his experiences were enjoyable for a bit but left him feeling depressed. Furthermore, all of Belle de Jour's clients have eccentric sexual demands which have unsatisfactory endings. In one of the most bizarre sequences, a man takes her to his Gothic mansion where she forced to be dressed in black and laid in a coffin for his pleasure. Afterwards she is thrown out in the rain and asked to never be seen again.

Displaying a mix of passion, curiosity, vulnerability, and trepidation, Catherine Deneuve is memorable in the lead role. Much of her performance is carefully controlled by Buñuel. He often frames her in unusual compositions: at the edge of the frame or sitting or standing with her back turned. In one somber scene, she walks on a beach, looking down as a voice-over expresses indecision about her extra-marital activity. She wears beautiful Yves Saint Laurent-designed costumes which display her elegance and class but also button her up icily in black and red--providing a sort of armor against the real or imagined predators around her. She is iconic here.

The complexity of Buñuel's films often reward with repeat viewings. This one is no exception. There is something mystifying about Belle de Jour

yet unlike other twisty films of its nature, its opacity is enlightening and apt rather than frustrating. ****