women on the edge of sanity: the snake pit & nurse betty 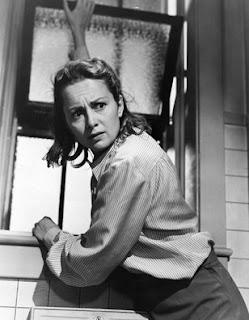 It's a coincidence that I watched Nurse Betty

and The Snake Pit

back to back. I see how both films were risky as mainstream studio productions in different eras. Even though they aren't perfect pictures, there's something admirable about their conceptions. It's interesting to see how their narratives are led by characters who are insane--one funny and one harrowing. de Havilland and Zellwegger both play women living out of reality and who, in the avoidance of their traumas, go on emotional journeys, eventually coming into their own.

There is one scene in The Snake Pit

that is a powerhouse: a mental hospital ward is serenaded to the song "Goin' Home." Knowing that many there will eventually die where they are, the song has a sad resonance. Although the film's protagonist (played by Olivia de Havilland in a superb performance) is at times emotionally difficult to relate to, Anatole Litvak's movie should be admired overall for its courageous depictions of mental illness (especially by Hollywood's standards). Based on the best-selling 1946 (not autobiographical) novel by Mary Jane Ward, who thoroughly researched a state institution and produced by Darryl F. Zancuk (who previously produced successful serious issue pictures like Grapes of Wrath

shows the grim deterioration and eventual recovery of a woman, Virginia, after misplacing the guilt over her husband's death.

Throughout, there are many slick stylistic moves--most notably in the shot alluding to the film's title. Alfred Newman's score booms in place of the noise of shock therapy. Virginia's sessions can be insistent, a little pat and dated. And yet, despite its flaws, the film is relentlessly unsentimental. We can see its influence in later works such as One Flew Over the Cuckoo's Nest

. The film is also populated with great actors in small roles. One of the most haunting performances is played by Betsy Blair as the mostly mute Hester.

The film--originally turned down by all the major studios until courageously picked up by Zanuck--was nominated for six Academy Awards and won one for Best Sound. Unfortunately de Havilland lost Best Actress to Jane Wyman (who was solid but not nearly as commanding) for Johnny Belinda 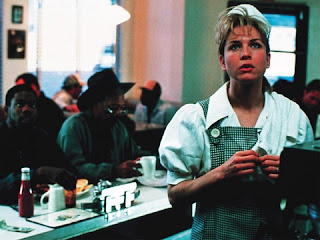 is Neil LaBute's darkly comic portrait of a waitress (Renee Zellwegger) from Kansas who, after witnessing the gruesome death of her husband, suddenly becomes delusional and believes she is the ex-wife of her favorite soap opera character (played by the charming Greg Kinnear). She leaves town with, unknown to her, a load of heroin in the trunk of her car and heads to L.A. in hopes to win back his heart. A father (Morgan Freeman) and son (Chris Rock) are on her heels to claim the drugs.

What makes the film work is the cast. Freeman is mysterious and in control of a bizarre part. Allison Janney is excellent as always as a droll soap opera producer. Zellwegger, usually a hit or miss actress really shades the likeable role well here with her bouts of confusion and wide-eyed innocence. Rock is the only one who is uneven and out-of-his-league against Freeman and only really shines when it seems like he's improvising.

There are many jokey references from Doris Day's "Que Sera Sera"

to Betty's Dorothy-esque gingham garb. Yet despite its slyness and some clever satire on show business, the film never really elevates much higher than its silly premise. There is nothing very interesting about the production values. And its score by Rolf Kent

is cloyingly sweet and tonally wrong for the picture. There is a troubling racial element that the film can't shake out with its tacked-on sans Prince Charming-Cinderella-ish happy ending. It's disappointing that the only black men in the story are the cause of Betty's trauma and also her saviors. In turn, Betty becomes a sort of white damsel in distress. It leaves a bitter aftertaste that I couldn't tell was intentional or not. **1/2