I recently watched 1972's The Getaway

and it got me thinking that there are no movie stars like Steve McQueen. In both films he is believable and electric. He is an action star but also a very good actor--especially in the physical sense (he did many of his own stunts). He is good looking but is also sort of rugged and real.

is best known for its car chase sequence which remains an exciting technical marvel today. The film won a well-deserved Oscar for Film Editing. However much of the film is methodical and psychological.

McQueen plays Lt. Frank Bullitt who tries to piece together a crime and nail a Senator's (wickedly played by Robert Vaughn) involvement. The plot may seem sort of a weak and predictable by today's standards but it was influential for coming films like The French Connection

There are many gritty and gory crime, hospital and morgue scenes which show the effects of violence and death on character. The name Bullitt itself becomes ironic. Much of the film's realism can be attributed to McQueen who wanted his action films to be as realistic as possible. Today only independent films take this approach--most Hollywood action films are overly glossy and high-tech and hardly resemble the America we live in.

reminds me a little of McQueen's in Bullitt

. They play anti-heroes who are not very emotive but filled with tension and complexity under the surface. Both films are crime dramas with convoluted plots which reveal corruption in powerful institutions. And both films have memorable cathartic showdowns (in a much more violent sense in Bullitt

) and open-ended situations for their lead characters who have been put through the ringer. 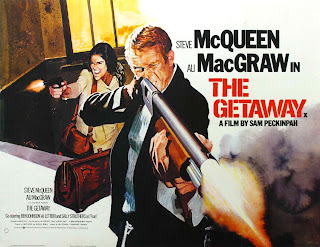 is an odd picture focused on the relationship of two characters ex-convict Doc and his wife Carol (played by real-life couple McQueen and Ali MacGraw) who are on the run from the law after escaping a botched bank robbery. It seems to owe a lot to Bonnie & Clyde

in tone, style and content but feels authentic as a caper of its own time period. The film also reminded me of the recent No Country for Old Men

in its depictions of violence and rural Texas. I haven't come across any evidence of the Coen Brothers being influenced by Peckinpah for that film but they have to have been clearly aware of his work.

There is one truly great scene where the two leads hide in a trash truck. When the truck unloads in a landfill, they tumble out with the trash in slow motion. It's a memorable and beautiful shot and a turning point in the film: Doc and Carol have now been through it all together and are reborn in a way to start anew.

It's rumored that The Getaway

was made purely for money but Peckinpah still leaves his artistic stamp on it. His films are ambivalent: they revel in violence while simultaneously finding violence repugnant. The female leads (like MacGraw here) usually seem stiff and slow-witted and are treated badly (McQueen memorably slaps her here) but are usually smarter than their male counterparts. The film was a huge hit in its day and yet relatively forgotten now. Perhaps because like Bullitt

there's a slowness to it, a sort of authentic drabness to the setting and a close attention to the characters' psychological journeys.

I enjoyed McQueen's performances in both. He was noted as being difficult to work with and an egomaniac but his artistry is reflected in these films as being subtle and true.

-Jeffery Berg
Posted by MrJeffery at 11:47 AM