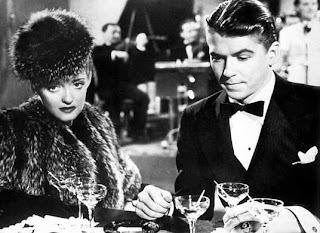 . Edmund Goulding's soap operatic film is an interesting relic from 1939, that last year of the Golden Age of Hollywood. Of the ten Best Picture nominees of that year, Dark Victory

pales in scope and drama to Gone with the Wind

and The Wizard of Oz.

And yet, Dark Victory

remains influential. The tearjerker has been with us through the ages, some successful, some overly sentimental. Love Story

was a manipulative smash in 1970 because it invited young couples to the cinema to cry. 1983's Terms of Endearment

effectively showed how cancer causes a revaluation of relationships. Pauline Kael famously criticized that film for "using cancer like a seal of approval. Cancer gives the movie its message: "Don't take people for granted; you never know when you're going to lose them." This summer's Funny People

is about how a comic deals with death. In Dark Victory

, there are quiet gestures and a lot of avoiding and talking behind other people's backs--anything to make the characters feel better about Judith's (Davis) impending doom. Like many tearjerkers, the storyline of Dark Victory

is spare, almost slight. Just as I wonder how Terms of Endearment

would be without the talent of Debra Winger, with Dark Victory

, I wonder what the film would have been without Davis. She has that gift and knack, that even makes contemporary audiences able to ride the mawkish ups and downs along with her without cringing. I love how Kael noted in her review of the film: "A gooey collection of clichés, but Davis slams her way through them in her nerviest style."

One of the best scenes in the film finds Judith at last call in a bar, wrapped in fur, asking a singer to sing the song again about "time." Another winner is the discovery of Prognosis Negative: a magnified, sudden closeup, with Max Steiner's booming score

in the background--somehow rendered effective through Bette Davis eyes. As she is here with many of her performances, she has tremendous energy and zing--though the turning wheels are well-matched this time with her character's fate. George Brent plays Dr. Steele who falls in love with Judith while trying to save her. Geraldine Fitzgerald offers strong support as Judith's more grounded friend. Critics have argued Humphrey Bogart is miscast as an Irish horse trainer who is secretly in love with Judith. I think he's excellent, as always, unfortunately his part doesn't seem to quite fit with the rest of the drama. An eerie Ronald Reagan looks suave and dapper and plays a functional drunk, a life that Judith almost decides to lead, but chooses not to.

When Judith tells Dr. Steele "it's our victory over the dark," the contemporary viewer in me winces. And yet there is something in the imagining of 1939 audiences weeping as vision-less Judith hobbles up the staircase to her deathbed that moves me. ***