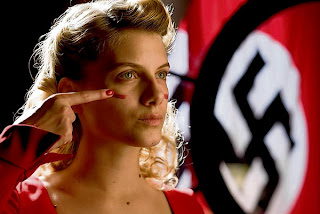 , is that it arrives in a year full of dumbed-down, bombastic CGI-laden fairytales for pubescent boys. A.O. Scott compared this season's hits to an "alarming man-baby, with the braying voice and the 5 o’clock shadow affixed to a pale, flabby, diaper-wrapped trunk." The trailers before Basterds indicated these types of baby food films will continue throughout 2009 with the nonsensical sequel to Rob Zombie's Halloween

, a film that has already had ten incarnations, and Robert Zemeckis's Disney remake of A Christmas Carol

Unlike the marketing campaign for this film, which focused heavily on Brad Pitt's starpower, Tarantino's film is less about the "basterds" and more about the dramatic tensions of two characters: the Nazi Colonel Landa (Christoph Waltz) and the girl who escaped from him, Shosanna (Mélanie Laurent). Waltz's performance is the highlight of the picture. It's unpredictable and mesmerizing. He steals every scene from the get-go. Laurent is reminiscent of Thurman in Kill Bill

, another one of Tarantino's noir-ish heroines. A tense reunion scene between Landa and Shosanna in a cafe over strudels, is one of the film's best.

One of the odd criticisms of Tarantino is that he loves the movies "too much." Yet, his constant referencing, through all the elements (soundtrack, scenery, staging, and script) is what gives his work a feverish, kinetic energy. It is true that this film sometimes goes slack--the underwhelming introduction of the "basterds" and a meandering subplot featuring Diane Kruger. Yet, even these moments are peppered with enough allusions and style to keep them lively. A slyly amusing Mike Meyers and The Time Machine

's Rod Taylor (unrecognizable as Winston Churchill!) make an oddly paced scene work. And Tarantino thankfully under-uses his friend Eli Roth who isn't good as "The Bear Jew" and Pitt who has some funny lines but isn't a talented enough actor to make his cartoonish character complex. 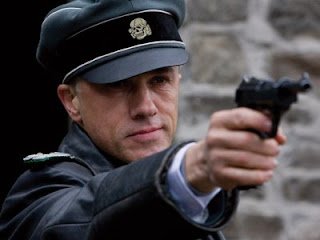 The visual detail Tarantino achieves with his crew is one of the joys of his works: Robert Richardson's artful camera is again stunning and the sets (with all that red) lovingly embrace the myths of westerns and 40s cinema.

with Jack Benny and Carole Lombard. In that film, with its dazzling screenplay, a Polish acting troupe fooled the Nazis. Like other films of its time, including Mrs. Miniver

, Hollywood inspired the U.S. war effort. Here, in a thrillingly climatic sequence, Tarantino offers up a violent fantasia where movies literally have the power to end war. With his unique vision, Tarantino again comes close to saving Hollywood itself. ***1/2