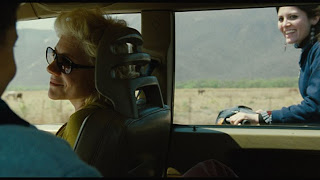 is a cold, spooky film paced with deliberate slowness by Lucrecia Martel. In an early scene, Verónica (played with conviction by Maria Onetto) runs into something on a dirt road. She turns, and the camera zooms in on a lifeless dog. A rainstorm breaks and soon Verónica is in a hospital getting X-Rays and showing signs of amnesia and shock. What follows is a thin plot but a deep psychological journey for Verónica that doesn't have clear or easy answers. Through a collection of tiny details (a child asleep in a market, the incessant ring of her cell phone--which rang before the accident), Verónica's memory jolts and she admits she believes she hit someone.

-esque moment, Verónica dyes her hair from blonde to black, her natural color). Because The Headless Woman

is so cerebral, complete with the claustrophobia of constant close-up long takes, some of the supporting characters (her husband who attempts to erase the details of the accident behind her back, his cousin with whom she has a brief sexual tryst, and a young lesbian who's in love with her) noticeably lack development. There is no film score, instead ordinary sounds (radio, rain, a soccer match) are made foreboding by the brilliant sound design. Even if the film isn't overly suspenseful, it's a compliment to Martel's skill as a filmmaker that she's able to stay so vividly within the confines of emotional disembodiment. ***