the killing of sister george 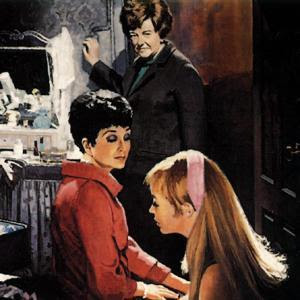 From beginning to end, Beryl Reid storms through this film

as June Buckridge, an actress who plays a prim, beloved Sister George on a BBC soap. Based on a play

, this 1968 British film explored a lesbian relationship in a pretty open fashion considering the time period. It received an X rating in the US and many scenes were cut. Now restored, the film is terribly dated but an interesting relic, especially for LGBT cinemaphiles. Many at the time objected to the portrayal of June--a hasty, loud and tweedy lesbian. She is so overly commanding, that it seems like the story is to make her pay for being "too overbearing" a woman. The ending is tragic, in a way, but there are no deaths (except for Buckridge's character, who "dies" in an amusing way). In this sense, it's a rare kind of lesbian film of its day.

Much of the film is about her inability to face the fact that scriptwriters want to kill off her character, George. Aging and overweight, June knows that her options as an actress are limited. Meanwhile, her long term live-in relationship with a girlish Alice, whom June nicknames "Childie" (Susannah York) is slowly deteriorating. Once June suspects her boss (Coral Browne) as having an interest in Alice, June is near-meltdown. All of this culminates in a tense (if stagy), darkly-lit scene where June lets everything out and the root of Alice's childish behavior is unmasked.

Watching this, I thought of Who's Afraid of Virginia Woolf?

which is a similar-in-tone, but much more successful and harrowing stage-to-film project. Unlike that film, which vacillated between various points of view, The Killing of Sister George

is firmly set on June, who at times, in all her histrionics, and despite Reid's skill as an actor, is a difficult character to follow.

The word lesbian is uttered once, by Alice, in the film's best lines: "Not all women are raving bloody lesbians, you know." To which June responds, "That is a misfortune I am perfectly well aware of!"

The strengths of this film is what it shows that isn't shown in many films of its day. The best sequence takes place in a divey lesbian bar where June and Alice are dressed as Laurel and Hardy. Unlike some aspects of the film, the patrons of this bar are authentic and fascinating to watch in their style and manner--as if a piece of hidden queer history is being uncovered. ***

-Jeffery Berg
Posted by MrJeffery at 7:21 AM