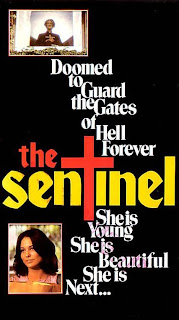 Part of the glut of Exorcist rip-offs of the 1970s, Michael Winner's The Sentinel is a ridiculous but truly enjoyable horror film based on a pulpy bestseller of its day.

Young fashion model Alison Parker (Cristina Gaines) moves into a furnished, creepy Brooklyn Heights brownstone. She has bizarre run-ins with kooky neighbors including a bumbling Burgess Meredith and two lesbian lovers in leotards. Yet Alison is never formally introduced to the mysterious shut-in priest who gazes out the top floor window. Soon enough, things go bump in the night and Alison starts seeing dead people. Little does she know that her brownstone is actually the gates of hell. 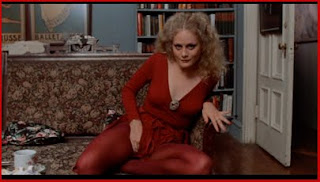 The fashion is top-notch. There are Eyes of Laura Mars-ish photoshoots for our heroine. The all-star cast includes Jose Ferrer, Sylvia Miles and Ava Gardner and Arthur Kennedy (who seem to phone-in performances just to fulfill Universal contracts) and future-stars Jerry Orbach, Jeff Goldblum, Christopher Walken and Beverly D'Angelo as one of the lesbians who figures in a surreal masturbation scene. The film is oddly shot with obvious Rosemary Baby cues. But the film never matches the tension or realism of Exorcist or Polanski's film. It's campy fun nevertheless with a climatic, Sam Raimi-esque sequence populated with deformed people (which caused controversy at the time of its release). **1/2


Please check out Costuminatrix's review of The Sentinel on her blog. I'm not as charming as she is. Photo courtesy of Scared Stiff Reviews.
Posted by MrJeffery at 5:35 PM

Email ThisBlogThis!Share to TwitterShare to FacebookShare to Pinterest
Labels: 1977, Film, michael winner, rosemary's baby, the exorcist, the eyes of laura mars, the sentinel