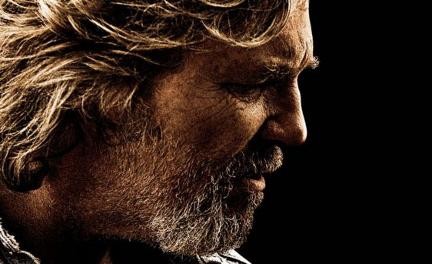 The plot is familiar as blues--an alcoholic, washed-up aging singer falls in love and ultimately finds redemption. It's similar to 1983's Tender Mercies

and echoes both the bleak grit of Darren Aronofsky's The Wrestler

and the tuneful slickness of the Johnny Cash biopic Walk the Line.

screenplay (adapted by Scott from a 1987 Thomas Cobb novel) is fairly funny and buoyant throughout, a charming throwback to old country and naturalistic classics of the early 70s such as Five Easy Pieces.

The crowning glory of the film is Jeff Bridges. Sometimes too overbearing, Bridges has finally been given a big ol' role that suits his robustness, his charms and gifts. He physically transforms into the greasy, bloated Bad Blake: recklessly driving a '78 Suburban, chain smoking, swigging whiskey, limping on a crutch, fiddling with his guitar. His voice, so haggard and worn, is perfect too, and he gives the film's outstanding country numbers an emotional pull. It's one of the great performances and a joy to watch. Maggie Gyllenhaal, as a small paper reporter and Blake's romantic interest, is so expressive and likable that I forgot that she seemed miscast, too metropolitan and too young for the role (she's in her 40s in the novel). A surprising revelation is Colin Farrell (always good at playing a slime ball) who nails his part as Bad Blake's Nashville-glitzed one-time protégé. Tender Mercies

's Robert Duvall shows up as Blake's salty bartender friend and offers up a little song (stay for its reprise in the closing credits).

Besides the stirring performances, the technical elements are strong as well. Cinematographer Barry Markowitz (All the Pretty Horses,

) provides many stunning shots and really should do more movies! The music enhances the film immeasurably. T-Bone Burnett who co-wrote the score and song production has modernized old folk and country on soundtracks such as Walk the Line,

, and O Brother, Where Art Thou?

which won the 2001 Grammy for Album of the Year. On Crazy Heart

's gorgeous soundtrack there are remnants of these rootsy, infectious sounds. The film's ultimate anthem is "The Weary Kind,"

written by Burnett, Ryan Bingham and the late Stephen Bruton (whom the film is dedicated to). It's a tender ode for the downtrodden. Another tune, "Fallin' & Flyin'," is gorgeously melodic and soars at one point when our story's two clashing stars sing it as a harmonious duet. It certainly sounds like a song that Blake could have recorded--a comforting, long-forgotten hit in the dustbin of American country music. ***1/2

Posted by MrJeffery at 7:36 AM