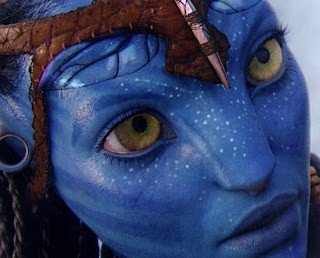 among them). His latest Avatar

is another immersion into a visual fantasy-land. Yet, there isn't much in the material to separate this mawkish, horribly written sentimental sci-fi from any other films that the 2000s pumped out at the multi-plexes. I kept looking away, down at the plain-looking audience members around me, who were obviously enraptured with the film, but were such a far cry from the expensive, sugary nonsense portrayed on-screen before them.

Sam Worthington plays Jake (not Jack), an injured Marine who travels to the planet Pandora on behalf of the military for a special mission. There he is able to become part of the Na'vi tribe (Navi is interestingly enough Thai for Marine) and begins to fall in love with Neytiri (expressively voiced by Zoe Saldana). The illustrations of the Na'vi people are an unfortunate aspect of an otherwise interesting premise. Smurf-blue, with braids, dreads and six packs, and voiced with stereotypical black inflections, they come off as another Hollywood-ized primitive African tribe. The script doesn't tell us too much about them. The movie dissonantly moves from their lush, too-pretty Pandora surroundings to steely military bases (which to me, were more interesting) by using close-ups on eyes. Once the film decides to side with the Na'vi against the badass crewcutted Americans in fighter planes, it becomes unique social commentary. Is this the first American film in a while where we are rooting against the Americans? There are spunky, too-short appearances by Sigourney Weaver and Michelle Rodriguez. Otherwise, there isn't much to the plot nor the love story between Neytiri and Jake.

is a mishmash of Cameron's other works but not nearly as assured. It lacks the grit of Aliens

is conveniently being marketed by McDonald's with flashy Happy Meal toys), not to mention that film's more exciting technical effects. And it tries to mimic a forbidden love story a la Titanic

but without the charisma of strong actors to rise above a bad script. A James Horner

tacked on the end credits is a weak attempt at "My Heart Will Go On."

And there are plenty of cringe inducing dialogue moments ("I see you.")

Despite its formulaic qualities, Cameron's film is being hailed as breakthrough and a sure-bet Best Picture nominee. Smartly the production team rolled out this in the same anti-climatic way Titanic

was released. But there were plenty of better films in the genre this year that worked against the grain on smaller budgets (District 9

among them). I think their rewards should be greater. *1/2

-Jeffery Berg
Posted by MrJeffery at 11:24 AM