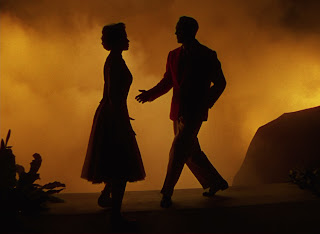 and An American in Paris

share many similarities: they are both Best Picture-winning musicals directed by Vincente Minnelli and both are extremely fluffy. In An American Paris

Gene Kelly winningly plays an upbeat but struggling American painter who lives in a tiny Paris flat. An aging heiress (played with great ease by Nina Foch--my favorite actor in the film) discovers him on the street one day, and decides to sponsor his work. By happenstance at a bar, he falls in love with an elusive and elegant Lise Bouvier (Leslie Caron in her splashy debut) who may already be attached to someone else. The plot is creaky and any tension, mostly set up between Kelly and Foch is quickly evaporated by the familiar love story. Yet the movie is a visual and aural delight. The music of George Gershwin ("I Got Rhythm,"

"Strike Up the Band"

) soars against the vibrant Paris backdrop (the film was filmed on elaborate sets not actual locations). Gene Kelly slinks his way through it but from a modern standpoint, the film is no Singin' in the Rain.

The love story just isn't that compelling. It's not until the climax--an explosive, gorgeously lit ballet sequence--that the film really dazzles. It's one of Minnelli's and cinema's all-time great set pieces. ***

backed by an uneven Lerner and Lowe score.

Leslie Caron plays the title character (her vocals were dubbed), a young girl who is being groomed to be a courtesan by her protective aunt (a perfectly cast Hermione Gingold). The handsome Louis Jourdan plays her suitor, who falls in love with her, not merely as an object of desire but as a young woman. 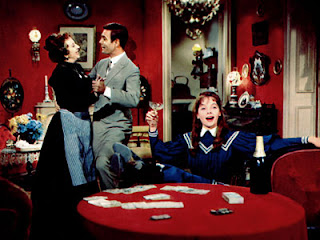 Again the visuals take center stage: impeccable and lavish period detail in costuming (many of the pieces are now iconic) and art direction. The film is nice but unlike Minelli's superior (and best) musical, Meet Me in St. Louis

lacks intimacy. There were moments where I wish the camera had gone in for some close-ups (even some medium ones!) but it remains a wide shot movie, too busy showing off all the artifice and decor. **

Posted by MrJeffery at 6:26 AM