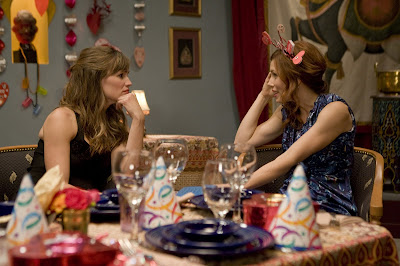 Sluggish pacing is usually death knell for the romantic comedy. Many filmmakers fail at attempting multiple story lines and some succeed. Garry Marshall, who found a knack for frothy films such as 1990's Pretty Woman, would be in the category of the former. Clocking in at 125 minutes, Valentine's Day is a turgid romantic comedy without much romance or comedy. It wastes the talents of Shirley MacLaine, Queen Latifah (playing another stereotype), Kathy Bates (in a nonsensical and completely unnecessary role), Julia Roberts (unbelievably cast as an Iraq soldier on leave), and Anne Hathaway (also unbelievable as a peppy poetry student who temps and moonlights as a phone sex operator). Most of the screen time is given to Ashton Kutcher, an attractive but terrible actor. I kept waiting for him to wink at the camera.

It's the audience who pays to see this who have been "punk'd." I won't even spend time on the plot which is more convoluted than the ridiculous intertwined L.A. story lines in Crash or 1974's Earthquake. I pictured a group of Hollywood executives drawing a Venn diagram on a dry erase board, connecting all of the characters in every possible fashion. The film could have been trimmed by at least 40 minutes, including a predictable subplot featuring Julia Roberts's niece Emma and a quizzical tween romance between Taylor Swift (all of her attempts at comedy fell flat in the audience) and Taylor Lautner. There is a gay storyline, that is shamelessly used as a plot device, with dated, sitcomish jokes sprinkled throughout ("I'm with you, just not behind you"). We watch all of the straight characters kiss, but for some reason, our gay men are reduced to a face caress. The supporting cast features a cutesy kid (Bryce Robinson), the painfully bad Jessica Biel, Geroge Lopez, Jessica Alba, McSteamy and McDreamy from "Grey's," Jamie Foxx, and I believe a dog or multiple dogs were in the movie for "aww cute there's a dog" moments.

In case you don't believe that this film is more a harmless frothy concoction, less a cold Hollywood product, Warner Brothers has already optioned a similar movie for New Year's Eve. The thought of that is equally nauseating. The problem is that Valentine's Day isn't a very compelling holiday. As a teacher, Jennifer Garner attempts to explain its history to a bored classroom. One of the few things that kept my interest, in the most base way, as if I were watching an episode of "Saved By the Bell," was "what is in the mysterious silver box?" Just so you aren't duped like I was, what's in the silver box isn't very thrilling. *

-Jeffery Berg
Posted by MrJeffery at 9:56 AM