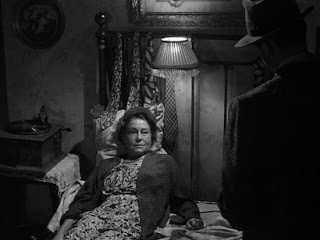 This month is Oscar season, so my DVR is full of TCM films. One of them is Pickup on South Street, a dark film noir about a pick-pocketer (played by Richard Widmark) who inadvertently steals government information from a wallet. The political drama is now outdated, but the film is still worth watching for its gritty script and great cast.
Classic character actor Thelma Ritter received her 4th Academy Award nomination for the film (she eventually lost six supporting nominations). Donna Reed won that year for her unlikely portrayal in From Here to Eternity but Ritter was perhaps much more award-worthy. In one particular scene, she steals the show. Since it involves a major plot development, those who haven't seen the film may want to avoid watching the clip below. But for those who are game, at the 2:26 mark, Ritter does amazing things as an actor playing a woman at the end of her day--alone (at least she thinks she is), tired, listening to a melancholy love song on her Victrola. It's a wrenching scene in its quietness and Ritter adds so much detail to create character. She registers a range of comedy, fear, and sadness in a short scene.
Posted by MrJeffery at 11:25 AM