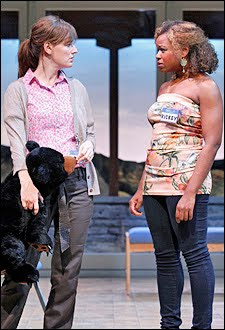 Jonathan Demme is still primarily known for his harrowing The Silence of the Lambs. An unlikely but deserving winner of five Academy Awards, the film remains one of our best and unique thrillers. Demme's direction often studies behavior. He came into his own two years ago with the poignant and ambiguous character study of Rachel Getting Married. It was critically praised but the Dogme 95 style and tragic story (its original advertisements and title seem to promise a romantic comedy) left audiences chilled. The film is one of Demme's best in a rich career of many different flavors and risks including documentaries, the offbeat Something Wild, the breakthrough mainstream AIDS drama Philadelphia, and the adaptation of Toni Morrison's Beloved.
Demme returns to much of the same material of Rachel Getting Married with his new off Broadway production of Beth Henley's (Crimes of the Heart) Family Week. The story centers on a suicidal woman Claire (Rosemarie DeWitt, also of Rachel in which she played the title character so brilliantly) who after the death of her son, admits herself to a recovery center in the desert. The title refers to the visiting of her kin, her mother (Kathleen Chalfant), her young daughter (Sami Gayle) and sister Rickey (Quincy Tyler Bernstine). Through the tumultuous therapeutic sessions, some of which seem bogus, others which seem to have some validity, the clan reveal many painful secrets to one another.
I wonder if Henley's writing, at times acidic and funny, despite the tragedy in the material, often gives too much away. Even though they are in different mediums, I can't help but compare Rachel Getting Married to Family Week and their similar pilings on of domestic traumas. The experience of Rachel Getting Married and its unraveling of family drama worked so well in the cinematic format: the closeups, the claustrophobic and dizzying feel of a busy house in preparations. On a sprawling stage, with some interludes of song (mostly appropriately dusty western tunes from the likes of Emmylou Harris) under moody lighting and complete with a vivid desert background, Family Week sometimes feels a bit repetitious. It was particularly difficult to connect with Claire's character, perhaps because she was so forgone (she holds a teddy throughout most of the production). Because of this, the play lacks a center to hold on to. In Rachel, damaged Kym (Anne Hathaway) bitterly drew us into her world. Whereas the family in Rachel (and too in Ordinary People, another extraordinary portrait of a family coping with tragedy) have been dealing with their wounds for a long time, the tragedy in Family Week is very fresh. Because of this the play works best when in its quirks: we learn that Claire eerily sent Rickey flowers from her dead son; in a closing monologue, Claire stunningly opens up in an odd and brilliant meditation of the body.
Even though the material is sometimes difficult to connect with, it's definitely not the fault of the four actors. The best, and most refreshing of all is Quincy Tyler Bernstine, who injects most of the play's humor and pathos. Her Rickey is very real, spontaneous, and layered (a child prodigy grown up and now broke). One hopes to see more roles for such a talented actress, her speaking voice is just incredible. I felt sympathy for DeWitt who is saddled with many heavy and emotional monologues. She carries it all so deftly without going overboard. Her tearful glares are unforgettable. Her daughter (Sami Gayle) is appropriately whiny, insecure, and precocious. And her WASPish mother is well played by Chalfant who is desperate for "hydrating soap" throughout the play, as if wanting to wash away the past.

Ticket information for Family Week.
Posted by MrJeffery at 7:17 AM