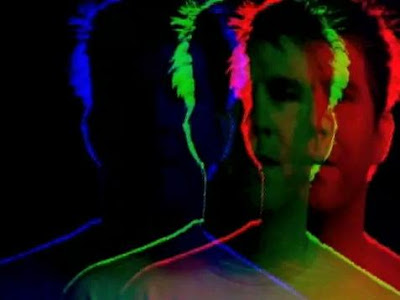 LCD Soundsystem at Webster Hall last night was electrifying. There were J-Lo "Waiting for Tonight" video lazer beams and cowbells. Nancy Whang was amazing on the keyboards and synths and Pat Mahoney on drums. There were also four new and very skilled members: Tyler Pope (bass), Gavin Russom (keyboards), David Scott Stone (guitar) and Matt Thornley (percussion). And then of course there's the tireless James Murphy with a big voice wearing a tight white Oxford and navy pants, and for the encore, a YSL t-shirt (they debuted a song at a fashion show).

We have to wait until May 17th for the new album (Murphy pleaded not to leak the record early). It will be difficult to live up to the first two but I was a fan of the new track "Pow Pow," of which they opened, a fun Giorgio Moroder-punk song reminiscent of their debut. They also played their single "Drunk Girls" and another new track, the mid-tempo, and very 80s electro popped "Change." Everyone was feeling the older stuff and it played well in a small venue, especially the epic "All My Friends." For "Tribulations," it was if long player disco music had been revived for a bit. And the slow build of "Someone's Great" sounded gorgeous. The band appropriately closed with the plaintive "New York, I Love You But You Bringing Me Down." Murphy joked that he was covering a Jay-Z song (a la "Empire State of Mind").

Playlist:
Pow Pow
Yr City's A Sucker
Us vs Them
Drunk Girls
Losing My Edge
All My Friends
Change
Tribulations
Movement
Yeah
Someone Great
Daft Punk Is Playing At My House
New York, I Love You But You're Bringing Me Down
Posted by MrJeffery at 6:56 AM