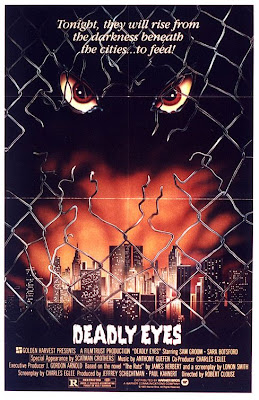 I took the advice from one of my favorite movie blogs, Rupert Pupkin Speaks, and watched two creature features from director Robert Clouse. Clouse is best known for his Enter the Dragon. Watching his schlocky animal against man flicks Deadly Eyes and The Pack, it's interesting to see how Clouse works within different genres. The Deadly Eyes refer to those of rats, who having fed on steroid-injected grains, are wreaking havoc and roaming the undergrounds of snowy Toronto. It's pretty standard stuff, with a group of characters that interact but never quite connect. It begins fittingly with a lecture on rats with a classroom of bored students. One of the girls (Lisa Langlois) has an intense crush on her teacher, the film's hero Paul Harris (a rather stiff Sam Groom). Meanwhile, Department of Health employee Sara Botsford (Kelly Leonard) and field inspector George (an amusing Scatman Crothers) are beginning to question mysterious deaths and activities in the city. All of this wants to be covered up by the mayor's office a la Jaws for the impending opening of a new subway line. It's fairly predictable what's to come out of this scenario.

Despite its pedestrian plot, Clouse pays tribute to the midnight movies before him. In a Blob-like moment and one of the better set pieces, the giant rats descend upon a movie house where unsuspecting teenagers are watching Clouse's Bruce Lee epic Game of Death (where the Bride of Kill Bill got her getup). One wishes Clouse had more fun, campy moments like this but the movie is saddled with some ridiculous plot points such as the budding romance between Groom and Leonard. I can't deny that there is something charming about the film. And as a person living in a city where I've come across rats seemingly the size of those depicted in Deadly Eyes (even though they are merely poor Dachshunds in rat costumes), this movie seems eerily possible. 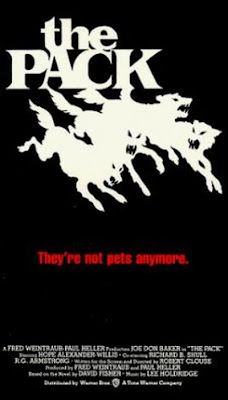 The Pack turns man's best friend against man. It insinuates an epidemic of Seal Island vacationers leaving behind dogs. The rabid strays on this island terrorize a man (an appealingly low-key Joe Don Baker... such a great drawl!), his new family, and a ragtag group of bumbling visitors.

This pre-Cujo horror film is much more competent than Deadly Eyes but less charmingly terrible. Again the film is bogged down by time spent on relationships that are difficult to connect with. What's great are the attack scenes and a stripped down realism in its filming of the dogs. It's much easier to relate to wronged dogs than rats. One tense scene involves a woman trapped in a Bug convertible. Clouse did not win any awards for direction but his use of slow-motion works better here than it did in Mel Gibson's Braveheart. The ending too is unexpectedly powerful for such a low budget drive in flick.
Posted by MrJeffery at 7:15 PM