a look back at 'coven' by justin lockwood 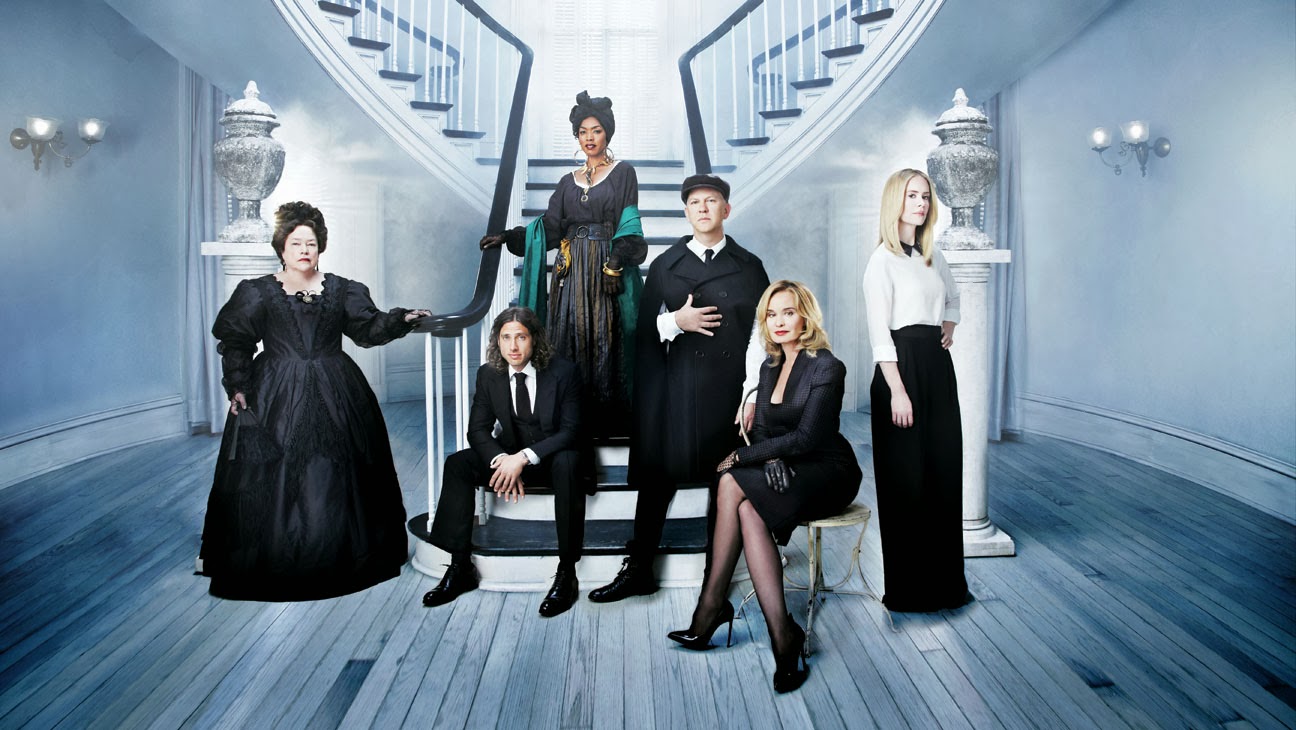 Following the finale of "Coven," the latest season of Ryan Murphy’s anthology American Horror Story, I went back and watched parts of the earlier episodes.  There were some terrific scenes, notably those between Jessica Lange’s devious, self-absorbed Supreme witch Fiona and the other female leads, Angela Bassett’s fact-based voodoo queen Marie Laveau and Kathy Bates’ cruel Madame Delphine LaLaurie, also a historical figure.  Their scenes together crackle with intensity and pathos, fueled by terrific performances from the women involved and sharp writing.  They imply the season’s primary themes: the complicated, fraught relationships between women as their roles have evolved over time, and an unsubtle, powerful dramatization of race relations writ large.  These themes were further developed by stunning set pieces like a torch wielding black mob, led by Marie, lynching LaLaurie’s family and entombing her below the ground and, later, a 1960s youth hung by white men, his death avenged by resurrected Confederate soldiers. 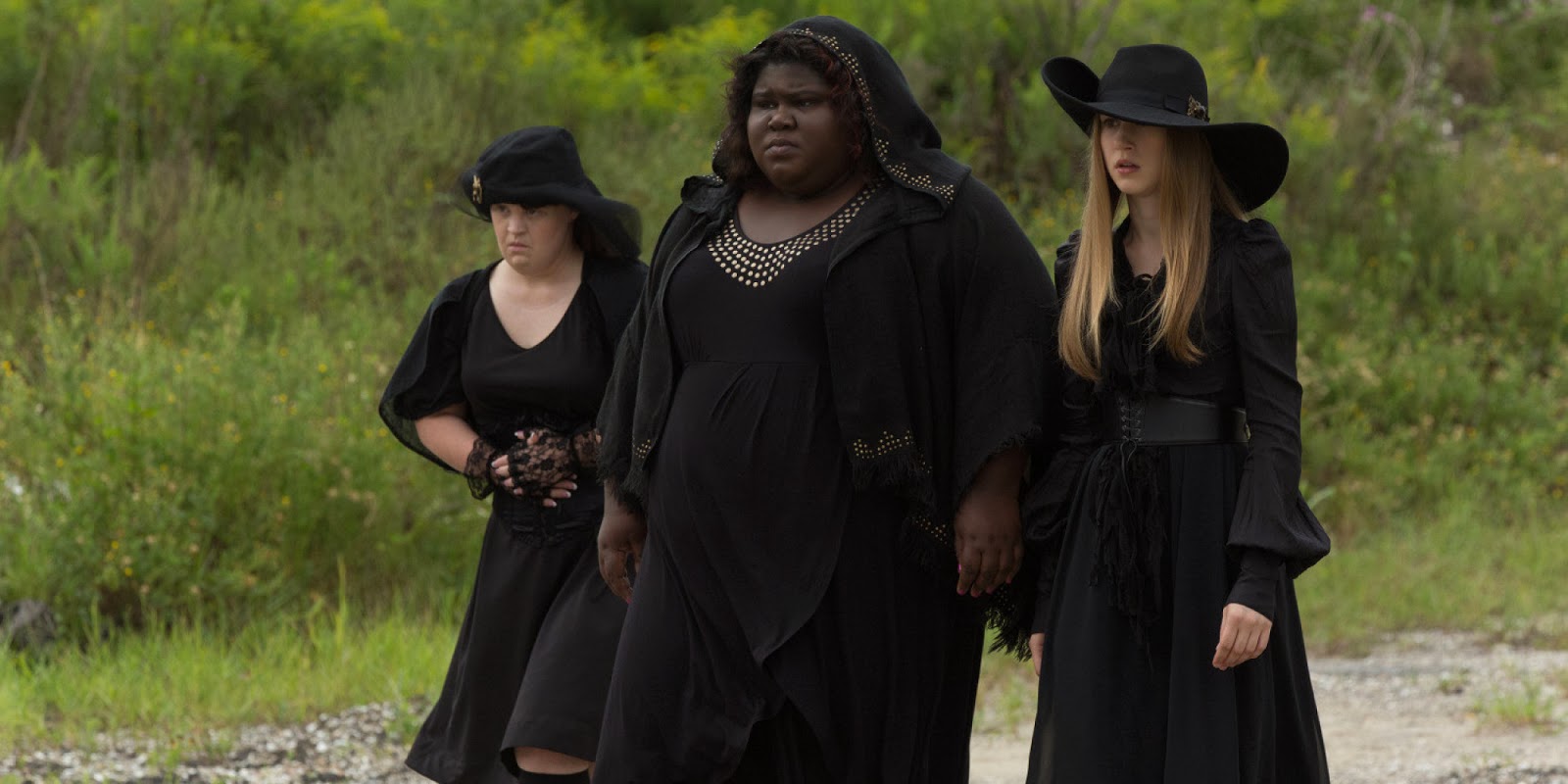 Unfortunately, "Coven" cast its net too widely beyond these potent conflicts, encompassing so many characters and mini-arcs that the central dramas got a bit lost in the shuffle.  Even the season long McGuffin—who would be the next Supreme?—took a back seat at times to diversions like “FrankenKyle,” a good-hearted frat boy turned monster involved in a love triangle with young witches Zoe (Taissa Farmiga) and Madison (a perfectly bitchy Emma Roberts).  Perhaps the best illustration of "Coven's" misguided attempt to do too damn much is its failure to produce an iconic monster in the style of the first two seasons.  While season 1 had Rubber Man and season 2 gave us Bloodyface, "Coven" stumbled by offering us three candidates: the Minotaur LaLaurie created out of Marie’s lover, the reality-based Ax Man of New Orleans (Danny Huston), and the demonic Papa Legba.  The Minotaur was dispatched early on—perhaps a twist meant to keep us guessing, but one which just felt anticlimactic.  Huston’s seductive, powerful work as the Ax Man made him memorable, but the series didn’t seem to know quite what to do with him.  Was he the love of Fiona’s life?  A mere pawn in the war between witches and their hunters, and Fiona and the witches themselves?  His ending with Fiona—apparently for her, Hell is domesticity with one dude—didn’t really make sense.  Both Fiona, who wreaked endless havoc in her life, and the Ax Man, who was all too happy to be stuck with Fiona for all time, seemingly deserved far worse than their fates.  Meanwhile, Legba was certainly striking, smoothly portrayed by Lance Reddick in creepy makeup and costume, but he should have been more prominent in the final episodes.  Instead, he, too, was shouldered aside by the wrapping up of countless loose threads like that FrankenKyle triangle.  (Spoiler alert: the doomed end of Farmiga and Peters’ relationship in season one was infinitely more satisfying than this season’s ho-hum happy ending.) 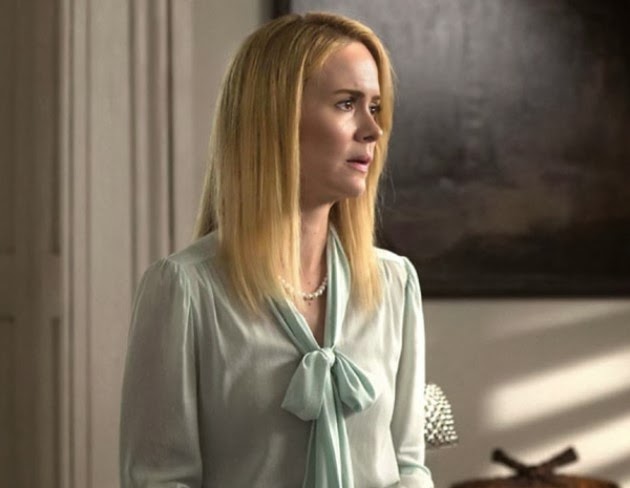 By the end, "Coven" was apparently intended as the story of two women: Fiona and her daughter Cordelia (Sarah Paulson).  LaLaurie and Marie met their fates in the second to last episode, fittingly trapped in an eternity of vengeance against each other in a Legba designed Hell.  The last episode focuses on the reality-TV like “Seven Wonders” challenge for the Supremacy.  Queenie (Gabourey Sidibe), after navigating a minefield of racial and sexual (dig that Minotaur seduction scene!) politics, ends up second in command to a white lady.  Zoe meets the same fate, after escaping an Emo sounding Hell of endless breakups with her undead boy toy. (Really, guys?  That’s her Hell?  Snooze.)  Then there’s Misty, the awesome Stevie Nicks loving Swamp Witch who seemed like an early favorite for Supreme.  She gets… condemned to a Hell in which she’s a tormented freak endlessly killing and resurrecting a frog in science class.  This one was a real head scratcher.  Misty was the least deserving of such an awful fate, having killed no one and resurrected half the cast with her benevolent magic. Apparently it was meant to be tragic irony, but to quote every college Fiction Writing class ever, It Didn’t Feel Earned.  By the end, Fiona re-emerges, ravaged by cancer and confronting the daughter she never knew how to love, who’s been named Supreme and encourages her mom to at long last accept her own mortality.  It’s a fitting end for both women—and a nice counterpoint to the Asylum finale, in which Paulson was the mom putting her insane son out of his personal misery—but it should have been supported by a season’s worth of narrower focus on both story arcs.  Paulson had her bad ass moments— mainly both times she was blind—and Lange had her share of juicy scenes, but this was more testament to the talent of the actresses than to the material itself.  As Lana and Sister Jude, respectively, Paulson and Lange emerged as the dark, transformed hearts of the sensational Asylum, evolving in ways that felt organic and well thought out.  To trace their character arcs in "Coven," one has to gleam on to bits and pieces scattered amidst mountains of speed plotting, crazy characters, and shock value. (Regarding Patti Lupone’s fundamentalist mom, Mare Winningham’s incestuous one, and about a dozen other odds and ends—um, what the heck was that all about?) For next season, which has a 1950s setting that sounds quite promising, I encourage Murphy to focus less on an endless supply of nuttiness and more on just a few killer characters and themes.  Your repertory company of kick ass women (and men) will make it more than worth our while without so many bells and whistles.