Since it's Oscar season, this week I decided to focus on the films which won Best Actor.  A fitting choice for President's Day, let's look back at Daniel Day-Lewis in Steven Spielberg's film Lincoln. 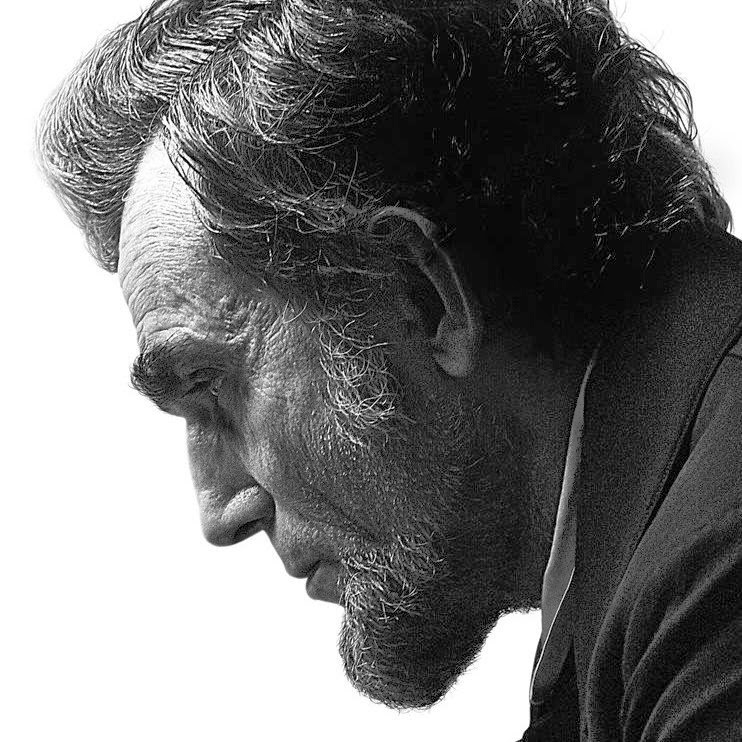 Lincoln is a stranger movie than I think it's gotten credit for.  Although it has a stately, polished air to it, it's also a bit loose and ambivalent on many levels. The movie opens with a quick glimpse of muddy Civil War violence, a far cry from the operatic beginning of Saving Private Ryan. The most interesting aspect to me of Spielberg's movie is how shut-off Lincoln is physically from the War and the gore and ills of American society which linger on outside in the background. Lincoln is primarily a political drawing room drama, with heavy, heavy drapery (the meticulous, but non-showy production design nabbed Rick Carter and Jim Erickson Academy Awards) sometimes offering a little sunlight but mainly blocking out visuals of the country's gloom.  Later in the film when news of bloodshed at Wilmington arrives, it comes through the quiet tapping of Morse Code and a flash of a newspaper's front page. And when Lincoln's son (a nice, against-type turn by Joseph Gordon-Levitt) follows a bloody trail and sees imagery of carnage, it's a sickening shock to him and to us.

This, I think, is a departure for Spielberg, who tends to gravitate towards getting his audience caught up in spectacle. Frequent collaborator John Williams offers a plaintive score that is a unique entry in his repertoire as well.  Instead of the usual skillful bombast, the music is docile with prairie piano rounds and nimble, string-ridden hoedowns that are sometimes ironically placed (in the slam of a door of a father of a fallen Confederate). From the outset, Spielberg pitches his film in a state of casualness and intimacy, with Daniel Day-Lewis's Lincoln talking with and listening to soldiers. Wanting to pass the amendment to abolish slavery before the end of war and his first term, the film follows Lincoln and his comrades working, sometimes unconventionally, on securing votes for its passage.

Tony Kushner, known for his plays, crafts a script that has an acidic, keen staginess to it. As the film smoothly moves through rooms, often under shadowy lighting, all of the characters, even the minor ones, are doing interesting, defining things. Everyone is offered rich, unique dialogue. In fact, Lincoln isn't always the primary focus: he's soft-spoken, filmed off-center, or shrouded in darkness--a bit of outdoor light on his profile. He's even lost in a sea of hats and people when delivering a speech in the film's somber, modest closing shot. Occasionally Lincoln will tell a tale, hunched and a bit aw-shucksish, and the camera will slowly zoom in on his charmed but wearied countenance. 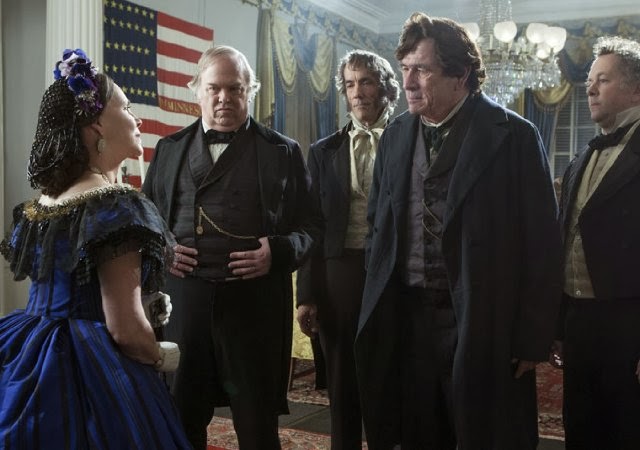 The seeming fragility of Lincoln and his thoughtful, quiet persuasiveness is a strong contrast to the rowdy House sessions where a lot of macho buffoonery and stupidity is on display (a picture which modern audiences could perhaps relate to).  As abolitionist Congressman Thaddeus Stevens, Tommy Lee Jones lends a sharp-witted, humorous, and emphatic voice in rooms oft-empty of one. The age and languishment of his fights are apparent in the wrinkles and the saggy deep pockets below his eyes. Like many of Jones' best roles, it isn't a glossy portrait, and he rises above and emerges as one of the movie's heroes and more complex characters, even if some may recoil a little from what they may view as schmaltz in the disarming wig-off reveal near the film's finale. 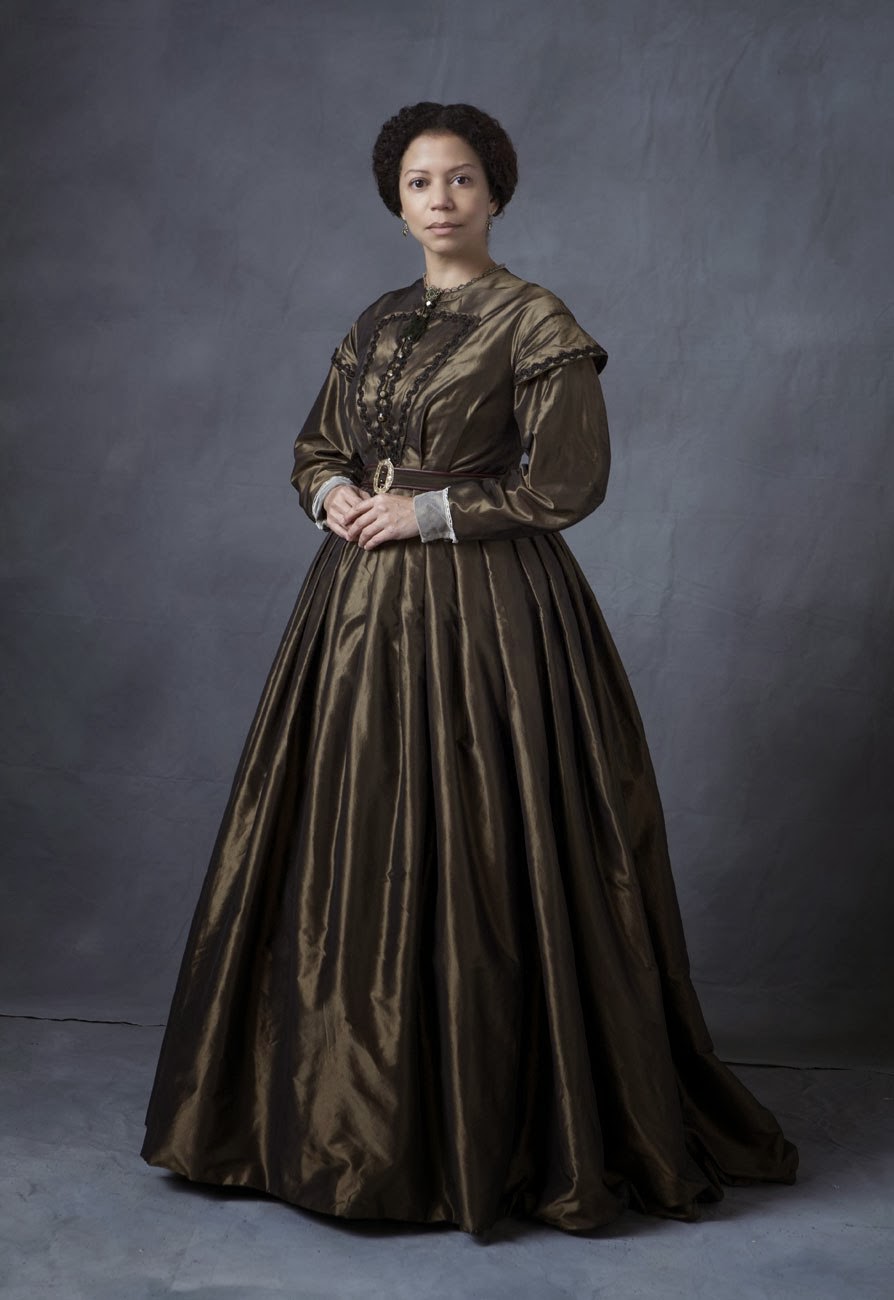 Also complex are the sidelined women. On the outside, Kushner's tortured Mary Todd Lincoln (Sally Field) is all stifled-up, worried and puffily-dressed. Plagued by headaches and depression, Mary, as a woman, has very little power. Sometimes the most destructive daggers are the quietest ones. Although occasionally tender, when her husband says vicious things like "I should have put you in the mad house," it's clear why Mary is the way she is; she has been long-misunderstood and with someone in a position of the highest of powers who can remain so calm and unaffected in the face of such roiling events. Field is dynamic in the role and although Spielberg originally wanted someone younger, I think her age and wise spirit give Mary an emotional gravitas. Mary's servant is Elizabeth Keckley, a fascinating, unsung woman whose autobiography Behind the Scenes showed her experiences in the White House. One of my favorite scenes is a small but movingly ambivalent one: the exchange between Lincoln and Keckley (Gloria Reuben) in the dark, on the White House steps. She wonders where black people will end up after the emancipation ("white people don't want us here").  And Lincoln tells her, "I don't know you... I assume I will get used to you."  Isn't there something so awful in the casualness of that comment as well?  It undercuts what could have been a potentially overly-saintly portrait. Like so many figures who have been assassinated, one wonders how history could have been altered.

I remember seeing Lincoln in a sold-out theater not long after Obama's reelection in 2012. There was something about the mood of that time and the film's absorbing stagecraft that worked so compellingly in that moment on the big screen. That near-end scene of Day-Lewis walking with his back turned in a top hat, with that amazingly captured gait haunted me a few days after. Since the film behaves more like a play, I do think the movie loses some of its power in a living room on TV. It was also undone a bit, I think, by a portentous awards campaign (including an introduction by Bill Clinton at the Golden Globes) which ended up hurting its Oscar chances and solidified the perspective of some that the movie was ponderous and sentimental. But Day-Lewis, Jones, Field, the crackerjack ensemble and many of Spielberg's unusually detailed film-making choices, make it worth a more careful look. ***1/2

-Jeffery Berg
Posted by MrJeffery at 8:07 AM