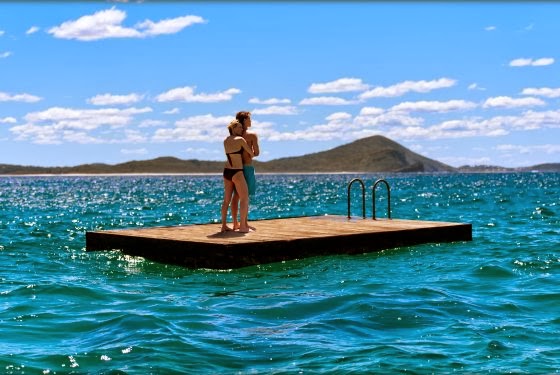 Adore is the kind of movie that might have had more acclaim if it were in French.  Based upon the Doris Lessing novella The Grandmothers, Anne Fontaine's film follows two very close-knit friends Lil (Naomi Watts) and Roz (Robin Wright) who fall in love with one another's young sons (surfer studs Xavier Samuel and James Frecheville).  I thought Adore would promise more fireworks (and skin?), but Fontaine's slow-paced sunlit New South Wales-set piece is a super flat frolic.  The characters seem to be unable to leave their little idyll though occasionally bruised paradise and why should they?  It looks like a good time. Though whenever the story begins to tread darker, especially as the years wear on, the movie seems to hold itself back. The uninteresting dialogue in a script by Christopher Hampton and Fontaine is delivered with a lot of clunky pausing by the attractive cast. Though I think there's a purpose to the insistence on making these single-syllable named characters so blurred, gauzy and interchangeable, it's a shame that none of these talented actors have characters who offer much distinctness. I really admired how Wright took on a risky part and worked out her accent, and she's definitely plausible here. She is also well-matched by the lovely Watts who is much better than she's gotten credit for. The film is not so bad either, with its gorgeous, supple scenery (the sunny photography is by Christophe Beaucarne) and actors, it's just a fairly weak brew. **1/2