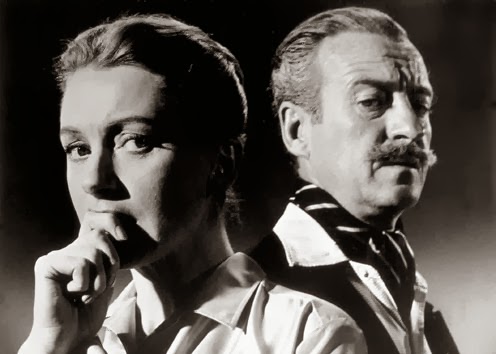 One of the oddest wins for Best Actor is probably David Niven's turn in the 1958 soaper Separate Tables.  Not that he's bad in the film, in fact, he's quite wonderful, it's just that he's only in it for a mere fifteen minutes; it's the shortest lead actor winning performance. Yet, as guilt-ridden Major David Agnus Pollock, he probably best defines the movie's themes: sadness, culpability and isolation. Separate Tables was adapted from a play by Terence Rattigan and was originally in two acts.  The film, directed by Delbert Mann, weaves the stories of the play's acts into one picture.  It takes place at the cozy seaside England Hotel Beauregard known, as a placard tells us, for being "Three Minutes from the Sea," for its "Fine Cuisine," and for its "Separate Tables." The movie follows the stories of a few semi-permanent guests at the hotel, including the shamed Major Pollock (Niven), a pent-up spinster Sibyl (Deborah Kerr) and her haughty, overbearing mother Maude (Gladys Cooper), and a divorced couple (Burt Lancaster and Rita Hayworth).  The hotel is smoothly run by the cool but complaisant proprietress Pat Cooper (Wendy Hiller, who won the Supporting Actress Oscar), plain in her brooches, cardigan and bun, who is also newly engaged to Lancaster's John.  There's also a genteel young couple (Rod Taylor and Audrey Dalton), mostly on the outskirts, deciding upon their future together. 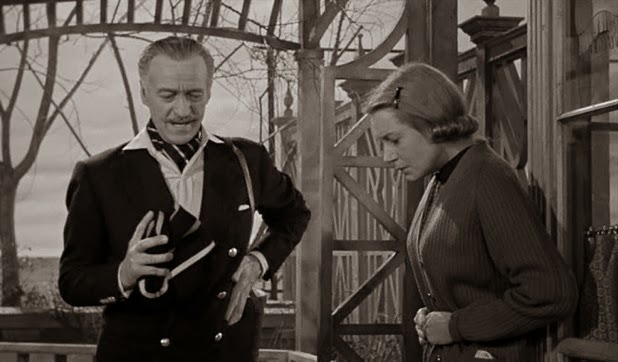 Though set in England, the movie is an extremely apt portrait of 1950s America and McCarthyism, with its sexual frustrations and buried taboos.  When the criminal charges against the Major's playboy past are found out in a newspaper article, Maude spearheads a campaign for the guests to shun him.  Painfully sheltered Sibyl, previously taken with the Major's suaveness and kindness, becomes enraged and shaken ("It made me sick!") by his reported actions.  A critical scene in the film is between the Major and Sibyl on the back deck.  It's a tense and solemn exchange with the Major unraveling his past and the reasoning for his disgraced actions ("Sometimes I've even managed to believe in the Major myself," he says).  I always wondered if the Major was closeted and didn't know how to act out his sexual inclinations. It's an excellent turn by Niven, with his slicked-back grayed hair, curled up fingers and posture at a near-crouch, patting at his blazer pocket and barely managing to look at Sibyl; he registers so much shame and emotion with his facial expressions. Kerr does her best but is saddled with the film's melodrama and an antiquated female portrait, but is tempered a bit by Niven and the supporting players.  Glowing Hayworth, in fact, offers rich contrast as a distraught, aging model afraid of being alone.  Her performance is very good, unassuming and also layered by the weight of her gloried Hollywood past. It's interesting too how the film pits her dramatically against Hiller, who is much more plain, less glamorous, even though they resemble each other in a very subtle way.  Hiller, a magnificent British actress, offers a very unshowy, homey and lived-in turn, and offers up some of the film's sense of ambiguity. 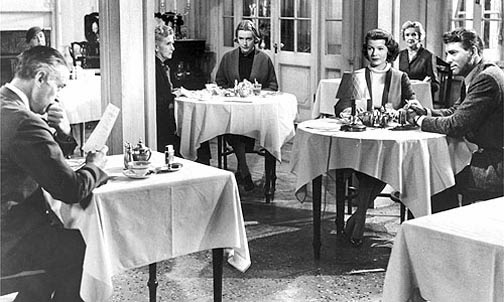 All of the events of Separate Tables are mostly indoors and unfold within a single place.  This could be a trapping for a movie, but so well-cast, decorated and directed so elegantly by Mann, the movie floats smoothly throughout the rooms of the inn. There's something satisfying about the setting and the way it heightens the mood and feel of the characters and their aloofness from the rest of the world.  Do the guests, many escaping from something, desperately need one another in a way? "Being alone in a crowd is worse," Hayworth laments toward the end of the film. The succinct black and white cinematography by Charles Lang highlights the use of lighting and character positioning (medium shots and closer ones) and also windows. The dialogue is very rich and loaded and meant, perhaps, for repeat viewings. Unlike many films of the era and perhaps reflecting the changing mores of the late-50s, Separate Tables is forgiving of the Major's ways and doesn't really end on any solidified, hammered-out notes or judgements, in fact, we're not quite sure where these characters will end up, including the young couple with all their naivete and promise as the end theme song swells away and the camera shows our characters barely visible behind the hotel's patched-glass windows. ***1/2

-Jeffery Berg
Posted by MrJeffery at 8:40 AM