don't carry me back to ole virginny 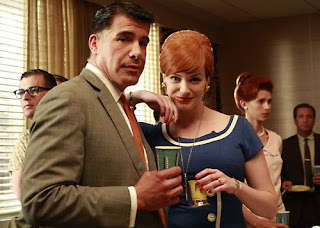 If you haven't watched your dvred episode of Sunday night's Mad Men, stop reading, but those who have ... remember who got fired this week?
Joe. My. God. posted a clip from a debate between Creigh Deeds and Bob McDonnell. McDonnell flat-out says he would overturn Mark Warner's order banning discrimination against hiring on the basis of sexual orientation.
I am outraged that McDonnell would want to revert his state back to the Mad Men era. There has been a lot of griping about Obama's slow movement to change LGBT issues. Yet there is a lot happening at local levels that could have devastating consequences for the community. I hope my home state will turn out for Deeds, but so far, McDonnell, flush with money and an admittedly effective moderate makeover, is in the lead.
Posted by MrJeffery at 9:28 AM