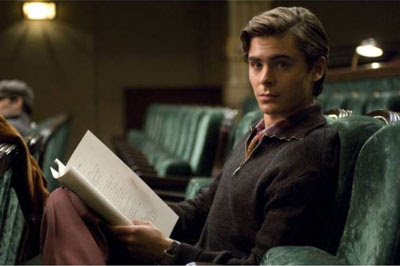 In 1937 at the then newly-founded Mercury Theater (now gone), Orson Welles staged a production of Julius Caesar

Even though the story is primarily a coming-of-age tale, it's rooted in interesting theatrical history.

Through sheer luck and charisma, young Richard (the charming Zac Efron who holds his own) lands the role of Lucius. Throughout rehearsals, he watches the work of future stars such as Joseph Cotten and begins to fall in love with Welles's assistant (Claire Danes), a seemingly warm but savvy Vassar grad, who has bigger dreams of her own.

The film primarily belongs to newcomer Christian McKay who portrayed Welles once before on stage in "Rosebud: The Lives of Orson Welles."

He does indeed have the mannerisms and speech down pat, but what McKay does in this film is enigmatic, alluring, and often electric, giving the story the shot of gravitas it sometimes lacks. His Welles is temperamental and selfish, but never the villain, a complicated genius of his time.

Like the folded up papers Welles leaves for his cast on opening night, Linklater offers up this little love note. Some Welles aficionados may be disappointed that this film is more Shakespeare in Love

, but it seems a wise decision that Linklater does not pay tribute through imitation. In fact, the straightforward approach makes the risk and the mastery of Welles's Caesar seem greater; the re-imagined scenes of the stark production is one of the film's highlights. Richard Linklater, whose resume is all over the map, often deals with the restless and the lovably aimless (from Dazed & Confused

), because of this, his films tend to sag a little, as this one does. I was quite happy, however, to be lost in this little gem. ***