house of the devil 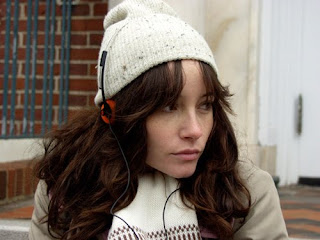 Is this the first horror movie in some time where instead of one thing to the next thing, one thing leads to another (as the song in the film suggests)?

Horror fans who are weary of the loud, suspense-less Michael Bay remakes, will likely enjoy Ti West's House of the Devil

. It's relatively quiet and burns slow, similar in plot to Rosemary's Baby

On the eve of a lunar eclipse, a college student, Samantha Hughes (a perfectly dour and ordinary Jocelin Donahue), desperate for money, takes on a babysitting job. Snooping alone in her client's (a spooky Tom Noonan) mysterious old house, she slowly begins to realize why she's there.

Set somewhere in the early 80s, there are a lot of great details: a Walkman with orange foam headphones, rotary telephones, paper Coke cups, denim backpacks, acid wash. The story itself is like something out of an "Unsolved Mysteries" rerun.

With his use of 16mm, West is knowing with the look of the film and his freeze frame, 70s styled title and end credits. Dee Wallace appears as "The Landlady". But the movie never really veers into camp, it seems instead, quite earnest and serious. I found the moodiness to be refreshingly low-key, reminding me of Nixon-era thrillers like Let's Scare Jessica to Death


Be sure to read this interesting interview with Ti West & article by Karina Longworth.

And Nick Shager's Slant review is pretty spot-on.
Posted by MrJeffery at 6:53 AM