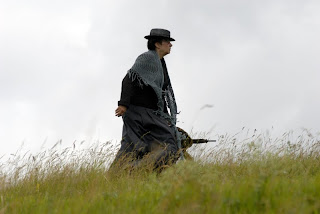 about the French painter Séraphine de Senlis is one of 2009's overlooked gems that came and went in the indie theaters. Yolande Moreau is astonishing in the lead role. Like the film itself, it's authentic, non-showy. She is well-matched by Ulrich Tukur who plays Wilhelm Uhde, the closeted art critic who discovers her and Rosseau among others. Their relationship in the film is a complicated beautiful friendship.

Loving and slow (with plenty of long takes and blackouts), the film is one of the best depictions of an artist on film. I was reminded of Schnabel's leisurely-paced Before Night Falls

which depicted the saga of another doomed artist (the Cuban poet Reinaldo Arenas). I thought too of Ed Harris's Pollock

. Wishing it had stuck to Lee Krasner's point of view (it's no wonder Marcia Gay Harden won an Oscar for that role), I found the protagonist a frustrating character to follow.

Here, the picture is truthful and involving. Towards the end, when much of her work is revealed, a character comments to Séraphine, "it's you." Like a bird making a nest, Séraphine goes place to place, using and creating her own materials--in the film, candle wax and chicken blood--amongst other things--to paint with.

As Séraphine slowly loses her mind and eventually ends up in a mental ward, the film stays true to her character without ever resorting to being condescending or glamorizing. After the screening, walking out the door, I was stunned by someone's reaction: "What made her go crazy? The war?" As with any good biographer, Provost doesn't provide any answers to this. There are hints all along that like the term deemed to the art movement she was a part of, that Séraphine was an outsider--climbing trees, singing and talking to herself, lonely and obsessive but enormously talented as well. **** 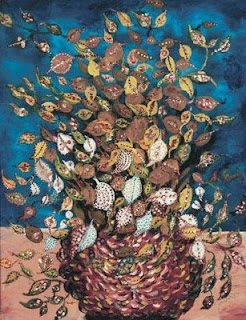 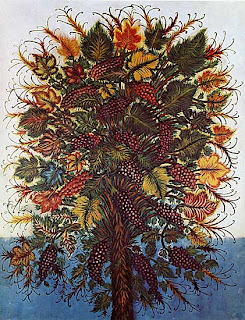 Posted by MrJeffery at 5:51 AM