don't you need somebody to love 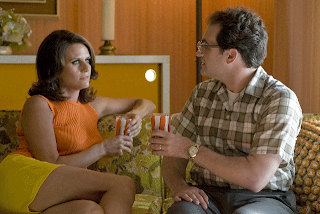 Can the universe be summed up by a rock song? The Coens suggest Jefferson Airplane's "Somebody to Love" in their new film A Serious Man

. After watching, I had to refresh myself with Job. A good, God-fearing, innocent man, Job wonders why so many bad things are happening to him. The movie playfully re-recreates his story with a Jewish physics professor, Larry Gopnik (Michael Stuhlbarg). It begins though literally off-kilter, in Yiddish, with an old, snowy, Eastern European folk tale. Seemingly unrelated, the scene is haunting and sets up the black humor of rest of the film perfectly--reflecting upon the mythological aspects of religion. This all moves beautifully into 1967 into the opening credits with the use of Jefferson Airplane and duel scenes of Gopnik and his son. The Coen brothers strike just the right tone so that we watch one bad thing happen after another to Larry in a way that is humorously believable and never tiresome. In one of the definitive Coen sequences, a Rabbi tells the fable to Larry of "A Goy's Teeth," which is uniformly hilarious, beautiful, sad, and ambiguous. It's the film's duende moment.

The Coen Brothers have hit the mark here in what may be their most personal film (both grew up in 60s Minnesota). To my knowledge, it's the first film of theirs to delve into their Jewish heritage. Some may find their approach off-putting, they both skewer and show love to the faith. When they are at their best, the efforts of the collaborations with their cast and crew is such a joy. Here, the bleakness of the subject matter goes down well with Roger Deakins's supple photography. He has been the driving force of many of the Coens' best films including No Country for Old Men

In what could have been standard, Deakins goes for unusual, gorgeously-lit shots: each one is unique and arresting. The look of the '67 is also captured in the exquisite set designs. This carefully created world is populated with a lively and funny cast: unlike the star-studded Burn After Reading,

A Serious Man relies on the talents of many relative unknowns. And it all culminates in a closing shot that could be one of cinema's most memorable. ***1/2

-Jeffery Berg
Posted by MrJeffery at 5:50 AM