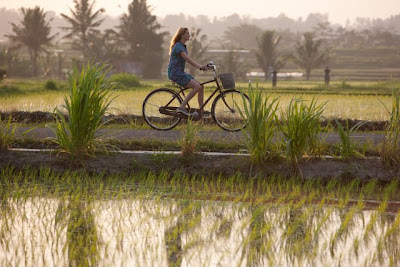 ) and turning them into films. Personal, quirky, and in some cases, far from actual truth, memoirs are tricky to adapt.

Unhappy with her life in New York, Elizabeth Gilbert divorced, left a hasty relationship with a younger man and for one year, trekked Italy, India, and Indonesia. The book is still a phenomenon: Oprah Winfrey touted the tome and devoted shows to its subject matter. Gilbert's story is extremely readable (I breezed through it in a day and a half), full of wordplay and unusual observations--an intensely personal journey but also a sometimes humorous and charming travel guide. The symmetry of the story (inherent in its title) ends up being pretty exquisite, if too precious.

Despite an overall faithfulness to the book, the interior spark and its immediacy (diary-like chapters go in and out of present and past tense), is lost in translation. It's definitely a rich feast for the eyes (Robert Richardson of Kill Bill

and Snow Falling on Cedars

did the cinematography) and Murphy (the editing work on all his projects are always fantastic) seamlessly blends the looks of each locale together. The soundtrack

too (Neil Young and Joao Gilberto) is apt and appealing to Gilbert's generation of Starbucks yuppies.

Yet the emotional frailness of Elizabeth, magnified on the big screen, feels trite in an era of sullen faces in unemployed lines on the evening news. Liz is often oblivious to her privilege and the constant support around her, complaining over trivial matters. It's premature to say what effect the film will have but perhaps watching Julia Roberts clad in leather and Anthropologie-esque tops eating pizza and prosciutto on melons is our contemporary version of Busby Berkeley. Roberts certainly has more vulnerable moments than in any film she's done and the film seems to have struck a chord with her (she is now practicing Hinduism), but Liz's sweeping travels are a lot for her to balance on her shoulders. One wonders if an actor like Toni Collette with stronger chops would have made it more touching. Any emotional investment hinges far too much on how one responds to Elizabeth as a character. 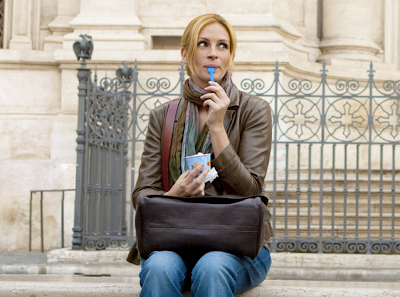 This is why it's refreshing whenever we have a glimpse into the lives of those she meets on her travels. Luckily here they are portrayed by great actors like Viola Davis, Richard Jenkins and Javier Bardem. The gifted Davis, is essentially given a throwaway part in the slack opening scenes (before all the eating, praying and loving), burdened with listening to Gilbert's incessant griping. Bardem, as Gilbert's Brazilian lover, is a natural. Jenkins has one particularly strong, loosely done monologue, a style of which I think would have benefited the film overall. But it blind sides us a bit, coming too quickly, before we feel we have gotten to know him enough.

Issues of race and cultural appropriation inherent in a story of a well-off white American will ignite controversy as it did with the book. Particularly cloying is the parallelism of the arranged marriage of an Indian girl and the plight of Bali's poor to Liz's emotional debilities. I guess one should be grateful that mainstream Hollywood took on such a messy project (female soul searching hasn't really been seen in pictures since the heyday of Alice Doesn't Live Here Anymore

). It's a mess that's often too cute, glossy and not ambiguous enough (Bali and India are fetishistic visions here), but an attempt nevertheless. **