the powerful and the powerless 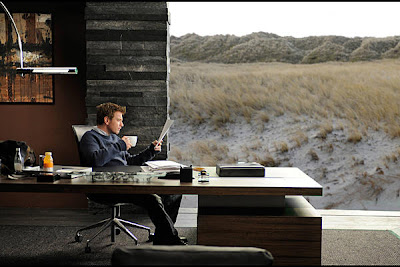 from Roman Polanski based upon a controversial novel, The Ghost by Robert Harris

. Taking the place of a previous ghost writer who died mysteriously, McGregor is sent to a house on a remote beach in wintry Massachusetts to begin his work. Meanwhile Lang is under intense scrutiny from the public and media for potential involvement in war crimes. McGregor finds his life in jeopardy as he uncovers unusual connections with people from Lang's past.

) are foreboding ones, where innocent characters are seemingly unaware in how much danger they are in, the film carefully building suspense (though events seem to be happening in a seemingly loose manner) until it reaches a striking conclusion. The tensions that lie within the controversies of Polanski's real life are applicable to the mise-en-scène. Edited in final stages while Polanski was in a Swiss prison, this project takes on a creepy, claustrophobic air. Filmed in Germany, it often looks bleak and other-worldly, as if it exists at the edge of the earth. Polanski's filming is stylish and gripping--meshing realism (the topical nature of the news stories) with artifice (a look-alike Condeleezza Rice appears). The house set design is a marvel: a glassy, ironic dwelling, with huge open windows to the sea, yet so closed off from the outside world. Here, Lang's quirky mix of assistants (a well-played Kim Catrall among them) have established their mode and routines. A brilliant Olivia Williams, with a gray streak of stress in her hair, plays Lang's oblique and hardened wife, who is housing secrets of her own.

As in any adult thriller, the script is prone to melodrama. Although the dialogue is at times awful, the whole affair is tamed by a subtle, well-honed performance by McGregor and Polanski's gorgeously overcast visuals. Unintentional or not, the obvious parallels to Tony Blair and distressing, Bush era malaise (though the clouded ramifications of war seem unending) are less intriguing than the stylish look of the film itself. Like Michael Clayton

, the movie is less a specific political statement and more a universal rumination on the powerful and the powerless. In Polanski's film, the powerful are weakened and isolated which leads them to be dangerously bitter and vengeful towards the powerless.

a kinetic and stormy myriad of bass clarinets and minor tones, adding to the gloomy but riveting atmosphere. In an interview, Desplat notes that Polanski wants the "music to mislead, to boost the energy in a scene, to create an invisible world and make it visible." ***1/2


-Jeffery Berg
Posted by MrJeffery at 8:04 AM