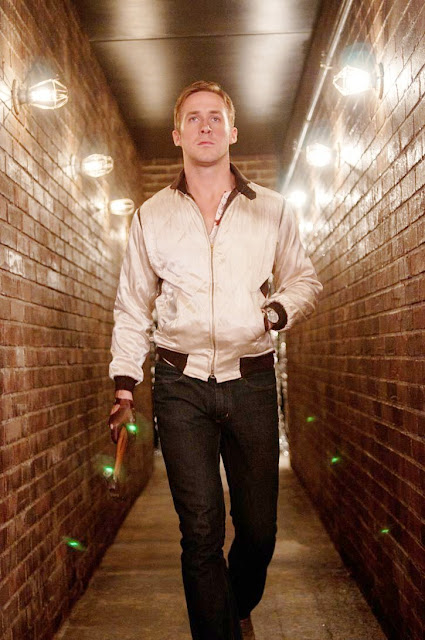 The title and marketing campaign for Drive as a rousing action flick may be misleading.  I hardly remember the car chases (for those looking for that, Bullitt or Fast and the Furious might be a better watch) but the mesmerizing, gloomy throb of director Nicolas Winding Refn's film is unforgettable.  Perhaps because I'm gay I relished all the idiosyncratic details: Ryan Gosling's shiny satin synthetic coat is emblazoned with a scorpion and like Tippi Hedren's mint green suit skirt in The Birds, it becomes more and more encrusted with gore as the film wears on. I related too to that shimmery soundtrack of French electropop. And I felt a sort of joy looking at that Risky Business-inspired hot pink cursive font in the main titles, backed by Kavinsky's pulsing "Nightcall" (appropriate to the storyline: the male voice in the song has a machine-like vocoder in a minor key, the female voice is softly reverbed in the major).

Ryan Gosling plays an unnamed character (dubbed in many reviews as The Driver), a stunt driver for Hollywood action flicks who also moonlights as a getaway driver.  Carey Mulligan plays his neighbor and sudden love interest.  Her husband (Oscar Isaac) is about to get out of jail and reunite with her and their young son (non-annoying child actor Kaden Leos).  Gosling soon gets embroiled into a botched heist and an East Coast mob. 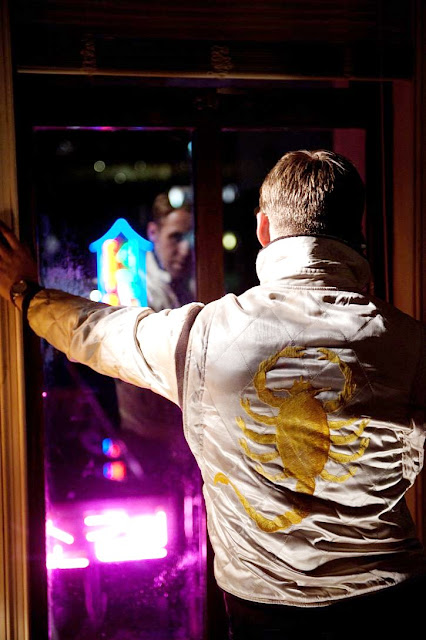 Handsome, stoic, deep-voiced Gosling usually oozes with sympathy and charm even when he's playing empty losers.  This is a perfect role for him and his laconic sensuality. His glum-eyed machoness is both physical (those big biceps and shoulders) and also emotional.  I love the way he is able to display nervousness--the way he sweetly breaks when he accepts a glass of water from Mulligan and the way he sweats and shakes with both fear and menacing determination wielding a hammer above a victim's head.  Besides Gosling, Refn provides a sort of memorable ragtag cast. Albert Brooks, a much missed presence in film, is an unlikely slimeball who flourishes with persuasion and sharp objects.  Ron Perlman's Jewish mobster is a blatant caricature made somewhat sad (he notes at one point that his family still treats him like a child).  The scenes with Mad Men's busty Christina Hendricks are so tensely directed, I wasn't too distracted by the fact that she's a de-glammed Joan (though her casting seems to be a little bit of a part of the film's kitsch).  Only Mulligan seems a little out of sorts--too sweet and pretty for her Denny's uniform (she still hasn't been cast right since her glowing performance in An Education) but she's able to believably carry the emotions of her character.

Refn's work is often stunningly tense (and gory... violence seems so sanitized by CGI in American films these days that the comic gore here is often shocking).  The gore and suspense saves it from being slick retro cheese.  Refn's Drive has a myriad of influences from the wandering, impotent male action pictures of the 70s to the dirges of John Carpenter and Michael Mann to Steven Soderbergh (Soderbergh's music collaborator Cliff Martinez provides the eerie score). And often Refn defies expectations (a final showdown is not as climatic as one would think... an operatic murder of a more minor character on a beach under the sweep of a lighthouse is more arresting).  The script by Iranian scribe Hossein Amini (who penned the 1997 adaptation of The Wings of the Dove) is pretty spare, never Tarantino chatty.  Before those divine main titles, the film opens in a stunner of a nighttime getaway sequence that doesn't have much dialogue at all except for background chatter (the clashing voices of a police scanner and a radio broadcast of a Dodgers game).  The dialogue may be a bit bland for those who favor mouthier vigilante pictures like Taxi Driver.  Yet Refn's play with gloss, substance, silence and sound is some of what makes Drive so controlled and so seductive. ****