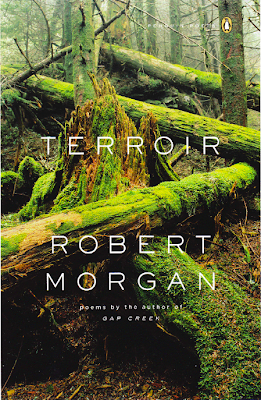 It was fitting to take Robert Morgan's new collection of poems, Terroir, with me to the "soft mountains" of Blue Ridge Virginia.  He describes the locale as "softness only in the face, / deceptive to the look as steel / encased in velvet."  This could also describe Morgan's lovely, pastoral poems which are both accessible and resonant but also like nature itself: a little offbeat and somewhat off-key.

Morgan's poems have many acute observations of beauty and recklessness in the natural world.  One of the strongest works in the collection ("Loaves and Fishes") describes in gritty detail a dead deer on the side of the road ("dead / and bloated so its legs shoot out / like barrels of some obscene bagpipe,") and its decay ("sinking out of sight in flood / of rising weeds and goldenrod").  Nature poems often struggle to contain the wildness of the wilderness through succinct articulation (Thomas Hardy's "The Darkling Thrush" is a renowned example).  Perhaps that's why Morgan's use of form and imagery (the containment and manipulation of water in "Squirt Gun") is often appealing.  Even if he can get carried away sometimes by lines like "the first fire / when darkness wept the stars and time began" he grounds it in the chemical, bland "Smells of a Closet."  It helps too that Morgan, as a well-established novelist, is able to write so eloquently about people.  In a distinctly southern voice,  the people presents are blended into the natural setting and sometimes struggle and resist it; the palms of his grandfather are callused from growing and selling produce door to door.

I keep tripping up the title of Morgan's book which basically means soil but carries on larger meanings  ("so close to terror you'd confuse / the two, as if the finest and / the rarest blend would come with just / a hint of fear or pain, the sting / and shiver of revulsion with / the savor of the earth and sun,").  In a decade saturated with images of natural destruction, Morgan's poems are sonorous.  Stuck in a Roanoke airport due to weather, I read Morgan's poems on the page, looked up past the angry, stranded passengers on their cell phones, and then out at those scenic, "soft mountains," and I felt myself in the trap of it all.
Posted by MrJeffery at 8:34 PM