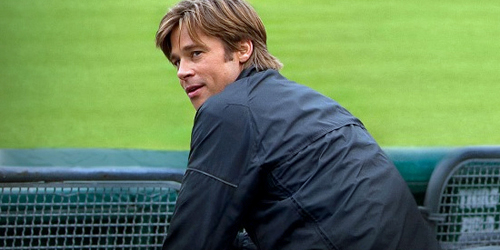 I like that Moneyball is an unorthodox sports movie about an unorthodox way to assemble a team.  Both have mixed results, but in the end, are a success.  Brad Pitt inhabits washed-up major leaguer Billy Beane who runs the scrappy Oakland A's.  When the team loses to the multi-million Yankees, and a few of its top players, Beane decides to make a risky move--hiring brainy Yale-grad Peter Brand (Jonah Hill).  Beane and Brand build a new roster based not on the usual criteria but upon the statistics of player behavior.

Baseball fans and readers of Michael Lewis's Moneyball may know what happens along the way, but it was a particular thrill for me not to know, so I won't spoil it.  The highs and lows are all masterfully handled by Aaron Sorkin and Steven Zallian's script, a good cast, and director Bennett Miller (Capote).  Miller's Capote was a somber, appropriately cold, almost clinical study of a writer's ethics.  It's hard to believe that the same director made this warm, uplifting movie.  Both films show Miller's elegant craftsmanship, an ability to spotlight good performers, and a knack for the biopic.  Sorkin's dialogue is appropriately less grandstanding than the computer geek banter in The Social Network but still has lots of funny moments (David Justice complaining over paying for soda is one of them). Interestingly enough, the brainiest characters, Brand, is also one of the quietest.  The film is less snappy too, with a simpler structure and almost languid pace.  In one of his most charismatic performances, Brad Pitt displays his character's bouts of frustration, isolationism (he barely tunes into watch or listen to the games), and his charm.  I've gotten tired of Hill's doe-eyed pothead shtick but here Hill is finally given a character that shows he can be an insightful, emotional human being. Aided by a script that knows what to do with them, the two make a memorable team.  The rest of the cast is believable including Philip Seymour Hoffman as the coach, Stephen Bishop as an aging but tough Justice and Chris Pratt--stunned and nervous at being one of the new picks.  Even if the movie runs long and even if I found Beane's daughter's song too cloyingly perfect, the movie is one of the more interesting and compelling sports movies this non sports fan can think of. ***1/2