"have you ever been properly alone?" 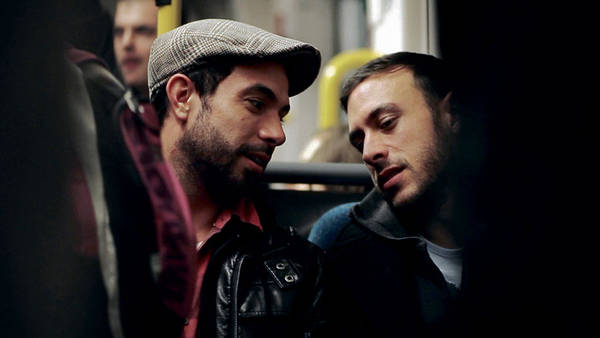 Weekend feels like the first gay movie that never hits a false note and that is no small feat.  It's the antithesis of all the bright-eyed (and brightly-lit) romances (there's an obvious dig to Notting Hill) and of gay films where sex and romance are portrayed as fulfilling and sustaining.  Tom Cullen plays the reticent Russell, a lifeguard, whose existence is summed up in one of the film's incredibly precise shots: him standing alone at the edge of the pool, uneasy and bored, a clock ticking above his head.  Russell meets Glen (Chris New) at the local gay bar (amusingly named Propaganda) and takes him home.  Instead of having the usual one night stand, Russell and Glen hit it off and the two share an intimate weekend.  The characters are full of contradictions: Russell likes old things, like his hodgepodge of second hand teacups but he likes his new kicks.  He's closeted to many around him but persuades Glen to ride on his bike with him in the middle of the street.  Glen is outspoken, forceful, quite loquacious about his sexual escapades (he records the tales of his sexual partners as a sort of artistic project... though the reason for that becomes somewhat ambivalent by the film's end) and he's not a fan of gay marriage ("...it feeds into the system").

The intimacy between the two is very involving and sensitively played.  It helps that they aren't generic stereotypes or typical generic beauties.  The inherent differences between the two can also speak, intentional or not, of larger frictions within the gay community at this moment in time.  The long takes, somewhat off-kilter hand-held shots (framing from behind a fence or between train seats or above from a 14th floor window), dull dialogue, banal settings (the obnoxiously noisy bars, Russell's bland concrete apartment complex) illustrate a sort of urban angst.  There isn't the philosophical banter in the golden-hued Before Sunrise and Before Sunset and there are no veiled daggers as in Who's Afraid of  Virginia Woolf? and Sunday Bloody Sunday, (films which seem like influences on, or at least comrades with Weekend).  The climax occurs during a coke-fueled argument which brings about their insecurities and painful realizations. The movie wanders languidly but arrives at an ending that's quietly haunting.  It isn't a cinematic journey I'm eager to repeat though overall I deeply cherish how Haigh's film deals with the uneasiness of being gay in a way I don't think any film I've seen before has been able to communicate.  Hopefully there will be more as good as this to follow. ****