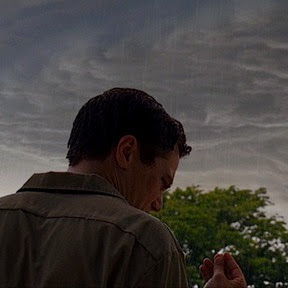 Take Shelter by writer / director Jeff Nichols is a cinematic attempt at capturing these uneasy American times by focusing on the mental deterioration (or just psychic apocalyptic visions?) of a blue collar Ohio construction worker named Curtis (played by Michael Shannon).  His wife Samantha (Jessica Chastain) has a small needlework business.  Both are trying to make ends meet and are caring for their young hearing impaired daughter (Tova Stewart).  Curtis becomes increasingly paranoid from violent, unsettling dreams and hallucinations which leads him to curious decisions like taking out a lavish bank loan to build a fallout shelter in the backyard.  Because his mother (Kathy Baker) suffered from schizophrenia, Curtis is worried this may be happening to him as well.  The movie clumsily juggles between being a serious movie about mental illness and an almost-horror movie (CGI flocks of birds) about paranoia of fantastical doom. 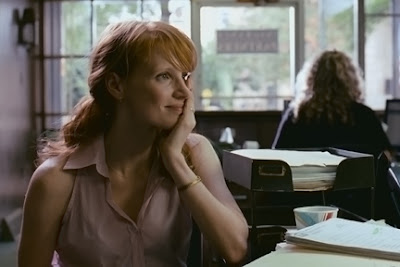 While Nichols shows some visual flair, the film is a study in bland America.  The dream sequences are the best assets--including a great shot of a dripping-wet Chastain about to pick up a knife--but all of them become increasingly repetitive.  What ends up being the scariest aspects of the movie are the struggles of everyday life: insurance, gas prices, losing work.  They are reminders of what most of us have to go back to after leaving this picture.  Shannon is certainly believable but I felt a bit detached from his performance, especially in a calculated, overwrought meltdown scene.  Detached would describe Chastain's character who doesn't respond with much urgency to her husband's bizarre behavior.  Both are interesting actors and do the best they can with the stilted material.  In a minuscule part as a therapist, I found Lisa Gay Hamilton to be the most authentic and a breath of fresh air.  The film has some relation to Polanski's vivid Repulsion, Aronofksy's Black Swan and Steven Spielberg's epic Close Encounters of the Third Kind where an every man goes to great, odd lengths to get to the bottom of his obsessive visions.  And while there's much to admire with what Nichols can do on a small budget, for a two hour film about dread, it doesn't offer much thrill.  There is little going on with the soundtrack (the sparse score is derivative) and it arrives at a frustratingly weak conclusion. Disappointingly it ends up being too restrained, an overlong Twilight Zone episode, almost Shyamalan-lite. **