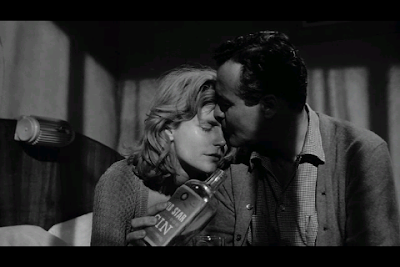 The sad story of Days of Wine and Roses

was an interesting choice for director Blake Edwards and actor Jack Lemmon, who were primarily known for slapstick. The film is based upon a successful 1958 Playhouse 90 television production. Set in San Francisco, it tells the story of a public relations man, Joe Clay (Lemmon), who falls in love with a secretary, Kirsten Arnesen (Lee Remick). The courtship isn't smooth sailing: Arnesen is fairly independent-minded and her father is suspect of Clay and his profession. Clay, a heavy drinker, mostly due to having to spearhead many drunken parties for his firm's clients, introduces Kristen to alcohol. After having a daughter, Kristen slowly becomes an alcoholic, at one point, accidentally burning down their apartment with a cigarette match. Clay loses his job and the two move in with Kristen's father. The couple attempt sobriety but the spiral continues downward. Clay is committed to a sanitarium and attends Alcohol Anonymous meetings and eventually achieves sobriety. Kristen on the other hand, is hopeless, choosing addiction to sobriety.

Thanks to Lemmon's active performance (he always is such a lovable guy, even when he's difficult) and under the sensitive direction of Edwards, Days of Wine and Roses

is still a good watch today. Remick is also good as the sad Kirsten. Since 1962, films have become more sophisticated with portraying addiction and alcoholism--there's a lot of dramatic bottle swigging on display here--but the rawness and sensitivity of the film is undeniable. The lovely score by Henry Mancini which primarily uses variations of the Oscar-winning title song

backs the breakdown of Clay and Kirsten's love affair effectively. Appropriate to the storyline, Mancini's melody rises and then falls, twice, and then resolves itself once it rises again. ***1/2


The title is from the Ernest Dowson poem "Vitae Summa Brevis Spem Nos Vetat Incohare Longam" from 1896 which is read by Remick in the film.

They are not long, the weeping and the laughter,
Love and desire and hate;
I think they have no portion in us after
We pass the gate.

They are not long, the days of wine and roses:
Out of a misty dream
Our path emerges for a while, then closes
Within a dream.

Posted by MrJeffery at 5:17 AM