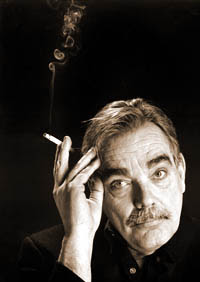 The work of Larry Levis has meant a lot to me as a writer. I wrote the poem "Closing" (now on Cavalier Literary Couture) as a tribute to him. When I lived in Richmond I worked in a bookstore and upstairs, where the accounting was done, and where one of Levis's friends worked, was his personal collection of books. What still haunts me is being up there with those books (some of the spines worn, some not) and looking out the window onto a city that has renewed itself in some aspects, but also still clings to a terrible past. It wasn't until after re-reading his poem "The Two Trees" that I felt compelled to write a poem about that experience.


Here is Larry's beautiful poem. If I were to think of a poem as a companion, I'd like to have this one:


My name in Latin is light to carry & victorious.
I'd read late in the library, then
Walk out past the stacks, rows, aisles

Of books, where the memoirs of battles slowly gave way
To case histories of molestation & abuse.

The black windows looked out onto the black lawn.

Friends, in the middle of this life, I was embraced
By failure. It clung to me & did not let go.
When I ran, brother limitation raced.

Acquaintances? So many strong opinions!

And when I tried to speak—
Someone always interrupting. My head ached.
And I would walk home in the blackness of winter.

I still had two friends, but they were trees.
One was a box elder, the other a horse chestnut.

I used to stop on my way home & talk to each

Of them. The three of us lived in Utah then, though
We never learned why, me, acer negundo, & the other
One, whose name I can never remember.

"Everything I have done has come to nothing.
It is not even worth mocking," I would tell them
And then I would look up into their limbs & see
How they were covered in ice. "You do not even
Have a car anymore," one of them would answer.

All their limbs glistening above me,
No light was as cold or clear.

I got over it, but I was never the same,

Hearing the snow change to rain & the wind swirl,
And the gull's cry, that it could not fly out of.

In time, in a few months, I could walk beneath
Both trees without bothering to look up
Anymore, neither at the one

Whose leaves & trunk were being slowly colonized by
Birds again, nor at the other, sleepier, more slender

One, that seemed frail, but was really

Oblivious to everything. Simply oblivious to it,
With the pale leaves climbing one side of it,
An obscure sheen in them,

And the other side, for some reason, black bare,
The same, almost irresistible, carved indifference

In the shape of its limbs

As if someone's cries for help
Had been muffled by them once, concealed there,

Her white flesh just underneath the slowly peeling bark

—while the joggers swerved around me & I stared—

Still tempting me to step in, find her,

And possess her completely.

-Larry Levis, from his collection Elegy


There is much to read about Levis on Blackbird. The last line of this poem should be indented more (hard to do on blogger) and the poem can be seen in its true form there.

VCU is hosting a conference on Levis this September.

"The Two Trees" by William Butler Yeats
Posted by MrJeffery at 6:21 PM