the demon in the reeds 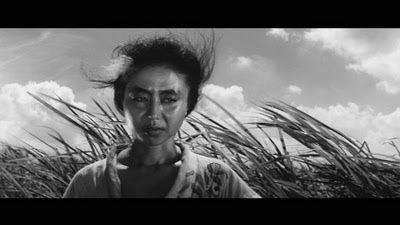 Stacie Ponder's at Final Girl latest film club pick is Kaneto Shindô's dark Onibaba. The story is based upon folklore, set on a field of reeds in war-torn fourteenth century Japan. Two women, an old mother (Nobuko Otowa who gives a vivid and complicated performance) of a man named Kichi and her daughter-in-law (Jitsukh Yoshimura) are starving, desperately trying to survive in a small hut on the edge of a swamp. They find soldiers and kill them (if not already found dead) strip their armor, uniforms, and swords to trade for food, and then dispose of their bodies in "the hole... deep and dark" nearby. When the old woman's son's comrade Hachi (Kei Satô) appears, she is both suspicious and rageful that he did not bring her son back alive. She is wary of him, of certain omens ("black sun," "hail and frost in summer") and is angered once Hachi begins to pursue her daughter-in-law. Soon enough, Hachi and the daughter-in-law begin a series of moonlight trysts. When Kichi's mother catches them, she is not only mad but desperate for sexual fulfilment as well, touching herself and groping a barren tree. She asks Hachi to make love to her ("I am not old on the inside") and he spurns her which makes her even more enraged. She warns her daughter-in-law of purgatory and the dire consequences of "sinful lust." Yet, the daughter-in-law disobeys, continuing her sexual affair with Hachi. When Kichi's mother kills a mysterious masked samurai, she uses his mask to terrorize her daughter-in-law. The deviousness of the mother leads her to demise.

Onibaba isn't necessarily religious or strictly allegorical, instead Shindô's work focuses on the passion of humans to protect themselves over protecting one another. Sexual passion both divides and unites. Chuck Stephens, in his essay on the Criterion edition of the film, called it "a gleefully deformed... cautionary tale about sexual jealousy and unrequited passion, reaffirming his propensity for superimposing the modern and the ancient, not to mention God and the devil." The beauty of the film, established in the opening shot of wind-blown reeds, is evident in many scenes, even when the film is at its most grisly. Director Kaneto Shindô shows human nature at its most brutal and carnal. There are so many memorable moments: the shots of Yoshimura running through the reeds under the sickle moonlight (the film was shot in its entirely in daylight; the blackout screens only enhance the eerie, surreal quality of the night scenes), the bottom of the black hole with its scattered skeletons, and the faces of those who fall prey to the mask (Shindô was thinking of the victims of Hiroshima). ***1/2
Posted by MrJeffery at 6:22 PM