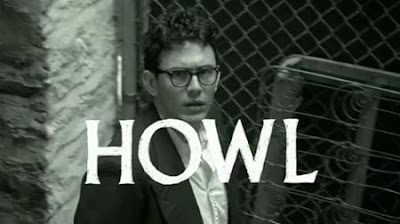 In 1957, Lawrence Ferlinghetti was arrested and charged for obscenity for publishing Allen Ginsberg's revolutionary poem Howl

which references sexuality and drug use among other topical taboos of the era. In the film Howl

, Judge Clayton Horn (Bob Balaban) remarks "...life is not encased in one formula whereby everyone acts the same and conforms to a particular pattern." Directors Robert Epstein and Jeffrey Friedman eschew straight narrative for a disjointed docu-styled one lensed in varying stocks which ultimately becomes repetitive. The movie is a cyclical wash of black and white scenes of Ginsberg (James Franco) reading Howl

, a blandly-realized obscenity trial (with an unfortunately-cast Jon Hamm as the lead defense attorney with no back story, constantly relying on all of his raised-eyebrow Don Draper expressions of surprise), tape-recorded interview scenes of Ginsberg, very literal Eric Drooker art montage translations, and of stray scenes that attempt to piece together some sort of biography. The jumbling of all of this seems to achieve something akin to what the directors believe is poetic. 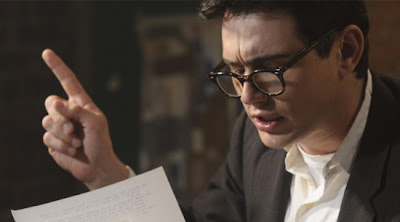 Epstein and Friedman are such incredibly important filmmakers; their exceptional documentaries (Word is Out

, The Times of Harvey Milk

, Common Threads: Stories from the Quilt

, and The Celluloid Closet

among their works) have been both influential and part of the national dialogue on homosexuality. It's because of how much I admire them and how important I believe the subject matter at hand to be that I feel a bit bad for thinking their Howl

doesn't do enough. The conversation that Ginsberg's landmark poem has with this film is often an interesting one, especially when the text is spoken by contrasting voices (lawyers and Ginsberg himself). Edward Lachman, a great cinematographer, is able to seamlessly capture many different tones as he did so well with on the similarly-styled I'm Not There.

. But the film often feels like a batch of missed opportunities: I yearned more for dialogue from Neal Cassady (Jon Prescot), Peter Orlovsky (Aaron Tveit), Ferlinghetti (Andrew Rogers) and company. James Franco is so compelling as Allen Ginsberg that it's a shame that Howl fails him so often. Surrounded by flat characters, Franco rises above everyone with the little bits the film gives him and carves out an eloquent, real and fascinating performance. He matches Ginsberg's cadences as well. This makes Howl

a sometimes lovely tribute but an incomplete one. **

-Jeffery Berg
Posted by MrJeffery at 7:35 AM