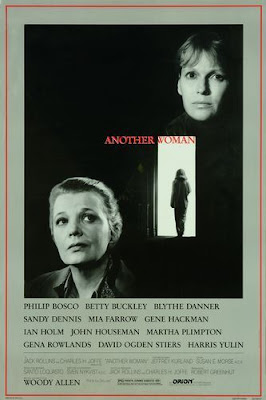 PopMatters was kind enough to include my article on the performance of Gena Rowlands in Another Woman. It's part of a series they are doing on women in the films of Woody Allen. There are some really great write-ups there of women, whether in major or minor roles, who have left indelible impressions in cinema.

It was really great to analyze Gena Rowlands and revisit the film. It's not really one of Woody Allen's most discussed films but I think it's one of his best. It's careful, moving, and wry and full of really interesting small appearances by great actors like Gene Hackman, Mia Farrow, Sandy Dennis, Ian Holm and John Houseman. Read my original review here.
Posted by MrJeffery at 7:59 AM