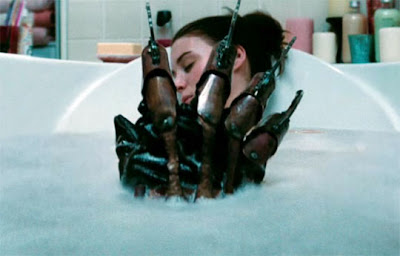 It's not saying much that 2010's A Nightmare on Elm Street

and the deplorable Rob Zombie Halloween

films). Wes Craven's story of child killer Freddy Krueger (presented here as a nursery school gardener and child molester) invading the dreams of suburban teens is so ingrained in popular culture that this rehash is pretty much useless. Jackie Earle Haley (who once auditioned for the original) is a creepy Krueger but never matches the unforgettable menace of Robert Englund. Unlike most recent horror fare, music video director Samuel Bayer takes time with the characters, creating space for heroine Nancy (Rooney Mara of The Social Network

and forthcoming Girl with a Dragon Tattoo

) and her concerned mother (Connie Britton) to give sensitive performances. Yet, as the teens struggle to unlock the mystery that's been unlocked in horror history since 1984, the film loses a lot of momentum (Nancy's showdown in the first film is much more inventive and still suspenseful). Glossier and less campy, Bayer's new, CGI-enhanced visual cues are a nice tribute but pale in comparison to the creativity of the shoestring originals. The scariest thing to me was realizing that these teens were in preschool in 1995! *1/2

-Jeffery Berg
Posted by MrJeffery at 8:24 AM