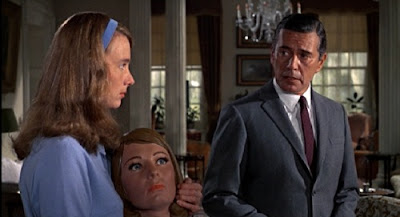 based upon a Leon Uris (Exodus

) novel. A complicated tale of intrigue, the story (scripted by Vertigo's

Samuel A. Taylor, after Hitchcock complained Uris's treatment was "unshootable") is loosely based on real-life "Sapphire" gang, a ring of Russian spies involved with Cuba at the height of the Cold War. The spy tale jets from Copenhagen where a Russian and his family are plucked, to D.C. where they are flown to live in anonymity and to supply the U.S. with information. In D.C., French intelligence agent, Andre Devereaux (Frederick Stafford), becomes embroiled with the intrigue. He follows leads in New York and Cuba and comes back to the states again. Cameras are traded, pictures taken and hidden, sometimes, at great human cost, film is sealed behind notebooks. The movie traces its labyrinth narrative by moving maze-like through rooms and small spaces (houses, flats, hotels, a greenhouse, an airplane lavatory, a secret room behind a pantry). Emphasizing the film's themes of displacement and betrayal, the movie never settles in one place for too long and the lengthy lineup of supporting characters, notably Devereaux's wife Nicole (Dany Robin), and his mistress Juanita (Karin Dor), are rarely who they seem to be to those around them. Once the ringleader of Topaz

is revealed, his fate is further complicated by Hitchcock's three different endings (including a stylish though somewhat anticlimactic "duel" scene reviled by test audiences).

, Hitchcock does something I can't recall him doing in any of his other films: meshing real-life footage (a grainy Castro rally and Soviet March) with his own work. Hitchcock is such a stylish, meticulous filmmaker that his films often lack the authenticity that this particular subject matter seems to warrant.

It's also a curious period piece, taking place in 1962. Movie audiences in 1969, confronted less with the Cold War and more with American social unrest and the war in Vietnam, were shunning many studio pictures, seeking out grittier pieces filmed on-location (Midnight Cowboy

among them). The picture, riddled with its stodgy '62 plot, its process shots and Hitch's studio gloss, is almost like a winsome goodbye letter to the decade. 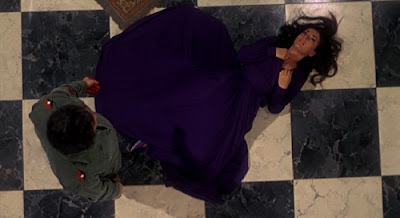 For these reasons, Topaz

is a bit of a Hitchcock oddity, and another marker in the decline at the end of his incredible oeuvre. Topaz

often lags, primarily in the oddly unmoving third act. Devereaux is cooly distant: not a unique character nor a strong cinematic presence to be intimate with (as were the protagonists of most of Hitchcock's great works). Yet there is so much in Topaz

that is fascinating. There is one magnificent overhead shot and an arresting use of color (a purple 'Rest in Peace' ribbon becomes symbolic when the color is worn by a fated character). The meticulous planning and thematic undercurrents of his scenes are often evident (the "china shop" opening and its suggestion of the film's fragile relationships). Common Hitchcock visual motifs of blood, the body, stairs, birds, and food are used to great effect. The music by Maurice Jarre is an interesting mix of the film's different cultural tones. I wonder, though, if the film would have had a bit more punch and thrill if scored by Bernard Herrmann. Edith Head's costumes are brilliantly alive throughout, and employ great use of Hitchcock's color symbolism.

was a box office disappointment and not one of Hitchcock's favorite directorial experiences. In retrospect, the source material--masculine, runaway bestseller spy intrigue populated with what he deemed as "cardboard characters"--was not conducive to Hitchcock's strengths. But even Hitchcock misfires are better than most any films out there. ***1/2