The slickness and technical bravado of David Fincher's films often leave little space for much emotional resonance. With The Social Network

, by far his best film, he has harnessed the perfect subject matter: the genesis of Facebook. Whereas many of Fincher's films are flabby, wandering off for long stretches (The Curious Case of Benjamin Button

thrives on a constricting, tight narrative. It's smartly paced like a political thriller (like All the President's Men

) and darkly ironic in its portrait of our era. The mastermind is Harvard undergrad Mark Zuckerberg (Jesse Eisenberg), portrayed here as an emotionally hollow computer genius, who, with the aid of fellow student Eduardo Saverin (Andrew Garfield), creates a social networking site for elite college students. When ambitious Napster founder Sean Parker (Justin Timberlake) discovers their site, he convinces Zuckerberg to revamp it into the global phenomenon it remains today.

It's a tall order for the mostly sour-faced Eisenberg to carry the film on his shoulders, but he does so throughout in what I think could become an iconic performance. Whenever he gives little flares of emotion, the film comes to life in a way that Fincher's films usually don't. In a genius stroke of casting, Justin Timberlake's Parker ups the ante for all the characters involved. His sleazy portrayal is masterful. Andrew Garfield emerges the most sympathetic of the bunch (he was a consultant for the source material, Ben Mezrich's The Accidental Billionaires

) in another one of the film's fine performances. 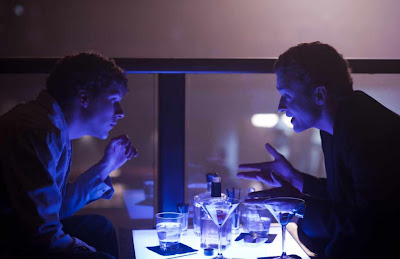 The talky script by Aaron Sorkin (A Few Good Men

) is at times great (especially in the opening scene and in nailing the greed and machismo of Parker) other times distracting. The dialogue itself barely rises above the standard of our cable TV shows: canned and too pat; empty rapid fire masquerading as smart banter. It could be argued that this is indeed the exact computer-like droning of this soulless group of people. He also captures irony well, specifically when former U.S. Treasurer head Larry Summers as Harvard president is blind to the looming economic and societal significance of Facebook. What is most effective about Sorkin's work is the structuring. All of the events revolve around two separate lawsuits against Zuckerberg. One from Saverin and another from nordic rowing team twin brothers, the Winklevoss's (Armie Hammer), who believe they gave Zuckerberg the idea of Facebook and were cheated out of his fortune. Tables of cold lawyers are really no worse than the callow youth they represent. The bleakness of these lawsuit scenes complement the back story beautifully. In the film's brauva closing sequence. a solitary Zuckerberg sits at one of the tables, scored fittingly, and so unforgettably, by The Beatles tune "Baby, You're A Rich Man." The narrative is driven by the brilliant film editing (Kirk Baxter and Angus Wall), Trent Reznor's (with Atticus Ross) moody score

, and the creepily lit, menacing tone of the Red One cinematography (Jeff Cronenweth).

could wind up being dated not because it's based upon such a volatile, changing landscape but because of the relative controversy over its veracity. Once the film is more carefully dissected, I wonder how it will be viewed. David Fincher has stated that he "got to a kind of truth about a place, a time, and a group of people—specifically the people whose names we used. I hope it’s fair. The intention was to be fair.” What other non-documentary films have covered the roots of a major corporation in such a compelling, thought-provoking way? At this moment in time, it's a breakthrough. ***1/2