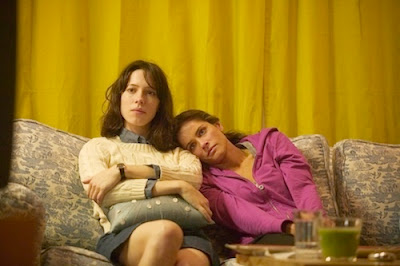 For New Yorkers, there is a lot to relate to in Nicole Holofcener's (Friends with Money

. There are plenty of rude, wickedly sardonic people, awkward elevator conversations, dog walkers with shit bags, facial spas, and thrift furniture shops where everything is mod, uncomfortable and priced in quadruple digits. Holofcener has Woody Allen's gift for soft satire and also a keen eye for contemporary, uncomfortably human moments (her film opens with close-ups of breasts readying for mammograms). As evident in her other works, and in this film in particular, arguably her best and most moving, she also knows how to direct a cast. Catherine Keener, skinny, long-haired, clad in black, Debra Winger-raspy-voiced, plays the owner of an overly priced 10th avenue furniture store. Her character is almost terrifyingly real. Anyone who has browsed one of these kinds of shops may be familiar with this type of person: sitting behind a Mac, asking, without much interest, if you need any help. Her jokey, rather lame husband (Oliver Platt) may be familiar too. He has a wandering eye and an affectation for Howard Stern. Sometimes people like this, with their seemingly endless stream of money and morally askew ways of making it (here, they nab items from dead people's places and overcharge it exorbitantly) are ingratiating company. Yet, Holofcener is quite adept at showing the frailties of these people. While the couple plots to annex the apartment of the 91-year old woman (a very funny Ann Morgan Guilbert) next door, Keener's Kate, is slowly sanded down by the guilt of her occupation. She attempts to remedy this, much to the disdain of her awkward 15-year old daughter (Sarah Steele), by volunteer work and giving five and twenty dollar bills to the homeless, but she is only capable of pity.

The grandaughter of Kate's neighbor, Rebecca (Rebecca Hall, in another remarkably real performance) is, in a way, Kate's opposite. Her job, as a radiology technician, is noble. Her romantic life is the pits. And without much help from her relentlessly insecure sister (Amanda Peet, subtly brilliant), she has been selflessly "giving" by taking care of her cantankerous grandmother for years. As the film builds, layer by layer, Kate and Rebecca form a bond in one of the film's surprisingly deeply moving moments. Holofcener doesn't make this bond sentimental nor easy. Perhaps the film's only flawed moments are within the love affair that develops between Platt and Peet. Yet the cast is just so good and Holofcener is so generous and wry with these characters (both could have been easily one-dimensional in a lesser-film) and their everyday frustrations, that even the few weak spots have something interesting to offer. The film is constructed like a great short story or a poignantly funny personal essay (Sarah Vowell appears in an amusing cameo), and it may frustrate viewers by not offering much in terms of resolution (I questioned it at first). There are some quiet moments of growth and transformation but like some other great films of the year (The Social Network

and The Kids Are All Right

), the film's authenticity derives from how we all value different things and how characters sometimes never change the way we may expect or want them to. ****

I agree with a lot with what Joe Morgenstern articulates in his glowing WSJ review.
Posted by MrJeffery at 2:36 PM