Alas, his fears are well founded.
There is thunder and lightning in the sky.
-Vivaldi, The Four Seasons


At St. Bartholomew's After a Breast Biopsy


The longest day -- Summer Solstice -- daylight
bides. I learn that dusk will wane
sometime during the Second Movement.
Adagio in Fall, then darkness.
I am twenty-nine.

In the mural above the nave
Christ lifts his arms to an invisible
practitioner. He's suspended
in a weatherless sky. And that grey dove,
is she coming or going?

I think of the story of you
painting a comedian's apartment high
on cocaine, how you confused colors,
reversed walls and ceiling.
I didn't know you then.
I only know the sober god who kisses
my nipples each morning before walking dogs
for a living: a change, a benediction.


Alicia Rebecca Myers's chapbook of poems, Greener, was released from Finishing Line Press in 2009. She has four poems in the current issue of Cream City Review, and a poem forthcoming in the Southern Poetry Anthology: Georgia. She is the Co-Editor of the online literary journal Clementine, and blogs about being a travel consultant and a poet at www.beccamyers.com. 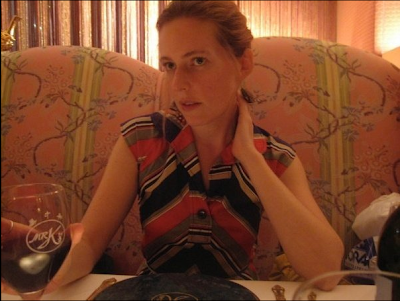 Posted by MrJeffery at 6:22 AM