a poem by christopher roberts

The Highrise Is Planted in the Years


i. When Godfrey and Linda Fall Back into the Quarrel

How can these two lovers snagged in the mesh
of their contended past, continually, be never spent,
still squabbling, still mired in this tireless endeavoring
to take some dumb gibe back? They keep trudging back,
and what could we expect?—harm out-running harm
in piled-on replies, then Godfrey’s eyes gone
the beamed-glass blanks of grease-thumbed specs
as Linda hoists last night’s bottle overhead,
last drops drizzling her arm—

Caught up in this charged, over-trampled bickering
they could do anything. There’s no place left to go.
And this blanched, flimsy leeway vertigo
Godfrey feels within himself, bristling, may grow,
spanning out until he could, if indeed he would,
hoist the spindled chair and hurl it through the glass!
He digs a heel into his calf to clench it up
and flicks a wicker trivet from the counter to the floor.

Neither’s gonna talk about this matter later on—
wet grounds spilling from the filter cone,
muffin crumbs and CD sleeves and ice cubes from a cup,
all tidied back later till there’s nothing but to scatter
the last ridge of dust at the dustpan’s lip
and swab the spackled wall where the red sauce drips
where the flung bowl struck:

Neither’s gonna relent, or wholly break the sense
of being riled in the tiff, both bearing back
some dumb rebuff, the stiffened jaws of stifled yawns—
but there for a time the catastrophe stumps,
where a popsicle is running in the sink
and the overboiled vermicelli clings
cooling in the pot to a sticky knotted clump.


Come time packed down we press on
Our aged demure appraisal of the years
We scrape up: For we have stalked
The quick protrusion of a bright hotel
Over land pressed and tucked into a faultless verge:
And we’ve been hoisted on a surge
Of air and dust to rooms we hoard inside the years.
And finding nothing left of us
To occupy the rooms, how long will we last
Tarrying in bearings we are unprepared to pass,
All our lagging trails gathering in hotels lunging
Bright up through the gust?

Christopher Roberts grew up in New Hampshire, received his MFA from New York University, and currently lives and teaches in Lafayette, Indiana. His poems have appeared in Cimarron Review and Clementine. 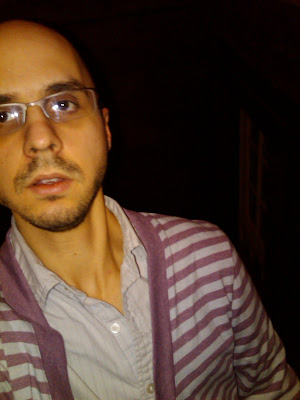 Posted by MrJeffery at 4:49 PM