a poem by jennifer l. knox

I Hate to Break This to You But


Her horoscope said there was something
important she needed to attend to—a change
her life kind of thing—and if she didn’t
deal with it between now and April 2012,
she would have a much harder time dealing
with it 30 years from now when the issues
resurfaced again. "What could it be?" she
wondered so hard her big face turned red
and began to sweat. She started making a list
of things it could be, but the sulfur fumes
from the plant blowing in through the broken
window crossed her eyes and scrambled her
letters. She filled one Big Gulp plastic cup with
gin for herself, and one for her life-sized stuffed
dolphin that took up the entire couch. She slid
down the crumbling wall to the floor with a thud
that finally jarred loose her bad back tooth
and flooded her mouth with the salty taste of blood.
She spit a long red glob into a brimming ashtray,
wiped her mouth, swished some gin around and felt
a tingling where her molar was, like tiny redhot
bells, hot angel bells, but what was the song
they were playing? “Whatever could it be,
Mister Flippers?”

"I Hate to Break This to You But" originally appeared in Lumberyard.

Jennifer L. Knox’s latest book of poems, The Mystery of the Hidden Driveway, is available from Bloof Books. Her poems have appeared in The New Yorker, American Poetry Review, and four times in The Best American Poetry series. She is working on her first novel. 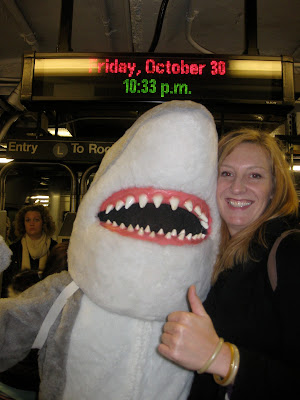 Posted by MrJeffery at 6:28 AM