a poem by rachelle cruz


What My Father Read


Without reason, he collected
books and didn't read them.
But his daughter did.  She read
about falling angels, the lashings
on a girl's back, crime driven
by passion, a yellow shirt
stained with black tea, the men
who lived like brothers
on Cannery Row.  Alice tumbling
down a rabbit hole,
King Solomon choosing between
feuding mothers and deciding
to split the child in half,
the incantation of Genesis,
Joseph and his journey of dreams.

Her father washed his hands
exactly five times before dinner,
plucking pinchfuls of rice from
the family plate with his fingers.
After dinner, he scrubbed his mouth
with a lemon, did exactly three
loads of dirty laundry, ignoring
the daughter's stained underwear
from a first year on her cycle,
the grass-stained jeans which meant
she was still a girl.  The father
scrubbed Palmolive on his fingertips
and in the darkening dusk, hung
the wet clothes on a cherry tree,
the ants crawling on the shiny
bark, latching on.

Rachelle Cruz is from Hayward, California.  She is the author of the chapbook, Self-Portrait as Rumor and Blood (Dancing Girl Press, 2012).  Her work has appeared in Muzzle Magazine, Splinter Generation, KCET's Departures Series, Inlandia: A Literary Journey, among others.  She hosts “The Blood-Jet Writing Hour” Radio Show on Blog Talk Radio.  An Emerging Voices Fellow, a Kundiman Fellow and a VONA writer, she lives and writes in Riverside, California. 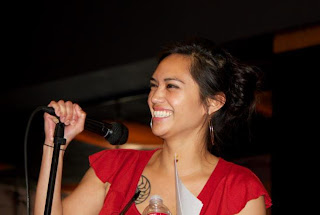 Posted by MrJeffery at 6:16 AM