a poem by nicole sealey


LaBeija, my house, is kept gold, swept clean.
Fronts fantasy from top to black bottom.
What I want to be, I be—crew-cut queen,
superman, mother and son—or become.
Catwalk as fierce as the fiercest real bitch,
I am high like fashion. And fame. I am
a man who likes men and a good cross-stitch,
whom homesick kids crowned legendary. Ma’am
of the ball, been walking now two decades
and got more grand prizes than all the rest.
The long and short: I’m a one-man parade,
elaborate drag, from manner to dress.
Within ballrooms I am most opulent.
Inside this house I am most relevant.

Nicole Sealey, an Afro-Latina poet who was born in St. Thomas, U.S.V.I., and raised in Central Florida, is a Cave Canem, Hedgebrook, and Squaw Valley alumna. Selected by D.A. Powell for inclusion in Best New Poets 2011 and a finalist for the 2011 Third Coast Poetry Prize, Nicole Sealey’s poems have appeared in the Harvard Review, Third Coast, and Callaloo, among others. 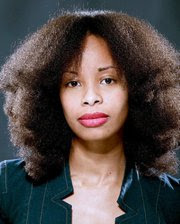 Posted by MrJeffery at 4:42 AM