a poem by rebecca myers


The Scrabble dictionary reveals a heaven made up
of smaller words. Inside my father’s heaven
even: everything keeled
level, curtain flattened free
of rise. Shouldn’t even angels cast their eyes
to the ceiling? The suit at speed dating
tells me he buys and sells
futures. (Inside his heaven have.) "I once predicted
a car crash," I say. When my first period came
I was ten and in the Planetarium, clutching
a bag of glow stars underneath a Styrofoam Moon,
balanced in the dark precarious, a bird on antlers
shattering a windshield.
A man's recorded voice taught me
topography.  Later, in the bathroom,
I plugged myself with tissue, passed from the known world
to the next.


Rebecca Myers's chapbook of poems, Greener, was released from Finishing Line Press in 2009. She has four poems in the Winter 2011 issue of Cream City Review, and a poem forthcoming in the Southern Poetry Anthology: Georgia. She lives in Athens, GA with poet/fiancee Dan Rosenberg, and works full time as a travel consultant. 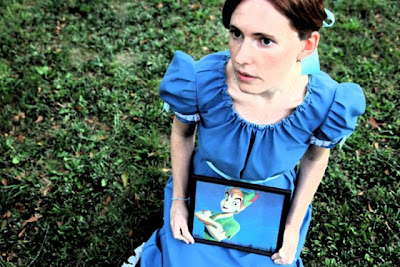 Posted by MrJeffery at 6:55 AM