a poem by robert siek


There’s no Santa Claus and we all die—
and this is eleven. Two candles Twin Towers parallel,
mimicking the number of this age another Christmas,
torches in ice cream cake, a sparking tuning fork,
buried handle-first in ground a touch still frozen.
My nephew’s birthday and he’s a year older.
He reminds me he was born at 5:23. His mother
told him once and it somehow stuck.
I never asked my mom that question or if I did
it’s entirely forgotten, unlike spring weather
every shared birthday cake with my grandmother,
the day before, after, or of Mother’s Day, each candle
a maypole, pagan and danced around, each year
things changing, underarms and voices,
so much to look forward to, life to celebrate,
candles blown out to applause, making a wish,
a cloud of soot exploding from the fireplace,
a chain of flowers left dying in the dirt.

Robert Siek is the author of the poetry collection Purpose and Devil Piss (Sibling Rivalry Press, 2013) and the chapbook Clubbed Kid (New School University, 2002). His poetry has most recently appeared in The Good Men Project, Painted Bride Quarterly, The Gay and Lesbian Review Worldwide, and VACZINE, as well as the anthology Between: New Gay Poetry. He curates the quarterly new queer poets reading series Newfangled at Bureau of General Services—Queer Division and occasionally blogs at hideandsiek.blogspot.com. 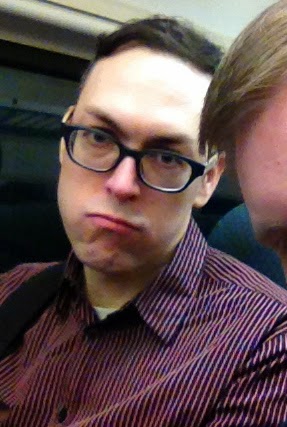 Posted by MrJeffery at 4:37 PM