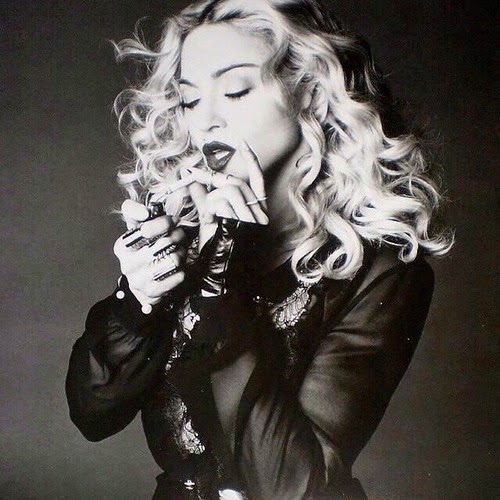 Let me get this out of the way: I realize Rebel Heart came out a while ago; in fact, the first 6 songs were released with pre-orders back in January.  But it takes me several listens to truly assess my feelings about an album.  This was especially true given my high hopes for Rebel Heart: in my opinion, Madonna hasn't had a truly great album since 2005’s Confessions on a Dance Floor.  Those first tracks left me cautiously optimistic: “Living for Love” is a choir-filled, floor stomping stunner, and “Ghosttown” is probably her best ballad this side of “Live to Tell.”  But “Devil May Pray” was pretty filler-y, and “Bitch I’m Madonna,” while fun, is the sort of indulgent cheese MDNA had far too much of.

But now, I’m happy to say, I've learned that Rebel Heart is everything I hoped for.  It’s Madonna’s best in years, and I can’t get enough of it.  Critics have already pointed out that former trendsetter Madonna worked too hard to follow other people’s trends on her last few efforts.  Breaking out of that pattern is a huge part of why Rebel Heart works as well as it does.  She’s confident and even a little experimental, producing dizzying songs like the tribal sounding “Best Night” and the raunchy “Holy Water,” the latter featuring both orgasmic “oh’s” and the types of deliciously sacrilegious references that are Queen M’s stock in trade.  Even the songs I wasn’t initially impressed by have grown on me: “Iconic” is arrogant but earns its swagger with a driving beat, and “Body Shop” manages to make potentially groan inducing innuendos about “headlights” and “curves” playful and sweet.  The large number of tracks—19, not including bonuses on the “Super Deluxe” edition—gives Madonna the opportunity to cover expansive sonic ground.  There’s quiet and contemplative (“Heartbreak City,” “Wash All Over Me,” “Rebel Heart”), brash and in-your-face (“Unapologetic Bitch” is awesome), and blends of both (“Veni Vidi Vici” finds the Material Girl looking back with references to her back catalogue that feel more earned here than they did on the frivolous MDNA, while guest Nas brings in his own life story—and attitude).  Her vocals are strong and show off her range, and the instrumentation harkens back to the grounded electronic backdrop of Ray of Light and Music.

Refreshingly, Rebel Heart really seems like it’s about something.  Beyond the usual suspects like come hither sexuality (does anyone doubt that, even at 56, this woman has a robust sex life?) and broken relationships, Madonna seems to be tackling her feelings about life in general—the one she’s lived, and the one she stills hopes to continue.  Fittingly, the artist who inspired multiple generations of pop is back to making music that doesn't sound like anyone else’s.  It’s thrillingly and enjoyably her own.